Edward Curtis Colver; a name that probably doesn't ring a bell with most people. However, it's most likely that you have seen his photography without even knowing it. His art - especially the black and white photographs - has been used in magazines, fanzines, documentaries and album covers over the years. Between 1979 and 1983, Edward visited almost every show in the L.A. punk scene and captured bands like Black Flag, Dead Kennedys, Circle Jerks, TSOL and Bad Religion.

Watch the next video to hear what Edward has to say about the beginning of his career as punk photographer:

One picture that will be familiar to many Bad Religion fans is a photograph called "Boots '80". It was taken in 1980 at the Oki Dog, a fastfood restaurant that became a punk hangout in the late 1970s. The photo was later licensed to Bad Religion for the "80-85" compilation cover, but it can also be found in the American Hardcore: A Tribal History book by Steven Blush.

As of April 2009, Edward started his own line of shirts and prints called 'Edward Colver's California Casualty'. The shirts are being produced and sold by independent companies, such as shirtkiller.com. For the real fans shirtkiller offers a Limited Edition Silkscreen Print of the "Boots '80" photograph. All prints have been signed and numbered by Edward.

Here's what Edward has to say about the "Boots '81" photograph in Razorcake magazine:
"Bad Religion's using that boot photo (the cover of '80-'85). I'm not happy with them one iota. It was okay for an album cover, but it's a T-shirt in Hot Topic and I'm going after them really soon. I don't really want to do that, but it's like, "Hey, this isn't cool." I couldn't find those negatives. I had an original 16"X 20" fiber-based paper print, which is worth more than five hundred bucks to me. That didn't come back and I didn't get any photo credit in the album. There were all these photos, including the Jimi Hendrix at 11 PM and Bad Religion at 10 PM set list thing inside there, and all of those pictures are all mine." 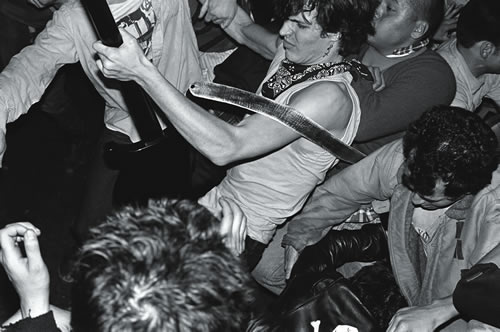 So what are you waiting for! Forget about that shirt at Hot Topic and buy this great piece of art to show your gratitude to this iconic photographer. Be quick, as there are only 200 prints available!

Extra tidbit - Besides the "Boots '81" photograph, Edward has also been responsible for the artwork of Bad Religion's How Could Hell Be Any Worse? Before actually taking the pictures that later covered the album sleeve, Edward shot a picture of the band throwing a brick through a car window. 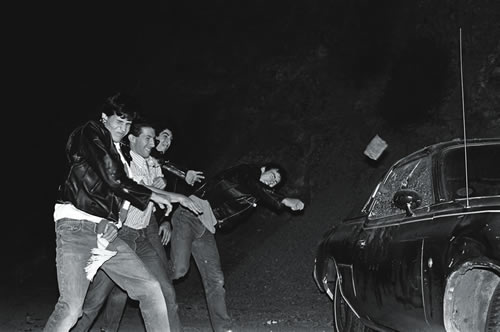 In an interview by Razorcake Magazine, Edward explains: "Here we are. Let's do this...on the count of three." It was an abondoned car up by the Hollywood Bowl, up by the cross, doing that picture the same night (How Could Hell Be Any Worse?). Making due with what's there."

For more info on Edward Colver visit his site.

Reported by: Ignatius Reilly
Tags: photos, Ed Colver, 80-85
Add a comment
Please keep your comments on topic. Off-topic discussions can be continued in our forum.
You don't have to be logged in to add comments. However, to prevent impersonation it is recommended.
Click here to log in or register.
User comments (6)
Search news
Related news items