After almost two months of touring across the US and Canada, the Vans Warped Tour officially ended last week in Los Angeles, California on August 23. However, Bad Religion finished their 5th Warped Tour a little earlier and played their last show in Portland, Oregon, on August 16.
As promised, right here a little summary of the last couple of shows in this Vans Warped Tour News Special Part II.

Last time we ended the News Special in Camden, NJ. The next day, the tour moved to the Nassau Veterans Memorial in Uniondale, NY. According to Greg Hetson's blog the band "played well and wrote out an amazing set list with help from NOFX and Flogging Molly". The setlist wasn't that different from the other ones, except for the song Anesthesia, which made it to the Warped set for the very first time during this tour! Apparently it was a success, as the band decided to play the song again in Ocean Port, NJ.

During the Warped Tour, George Koroneos from Life In A Bungalo, got the opportunity to interview Jay in New Jersey. Watch the video to find out what Jay has to say about Stranger Than Fiction, the band, the music industry and Into The Unknown.

Now there's only one thing left we really would like to know...what was it that Jay saw walking in the grass?!

After a day off, the band appeared on stage in Mansfield, MA. After the band's performance WeAreChange Rhode Island caught up with Jay for a 30 minute (!) interview on several topics. WeAreChange is 'a citizens based grassroots peace and social justice movement working to reveal the truth behind the events of September 11th as well as the lies of the government and corporate elite who remain suspect in this crime.' So check out the following video to see what Jay has to say about 9/11.

Besides Jay, Greg Hetson also had something to say that day in Massachusetts: "Today's Warped Tour Tip: Not cool in 1983...Still not cool. See photo"

The Charlotte, NC, show was marked with bad weather; it had been raining off and on that day and heavy thunderstorms caused a 15 minute delay in the middle of Bad Religion's set. The guys however don't seem to be bothered by the bad weather, as they still have a warm and comfortable place to go to: the tourbus. Just look at the picture (taken from Greg Graffin's Twitter) and decide for yourself... 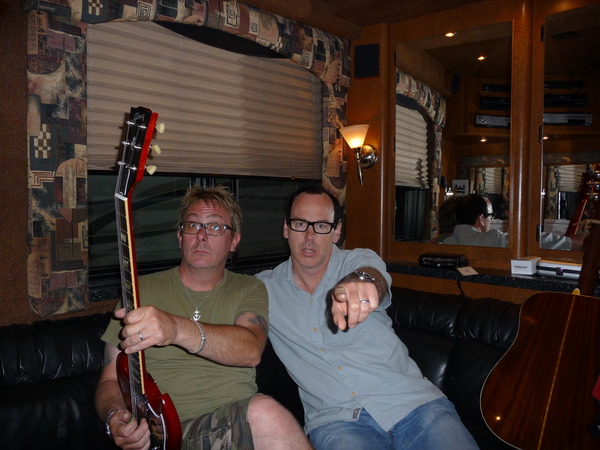 Close that door! Designing the set list takes concentration. Brian and Greg in the back lounge of the tour bus (Photo: Walter St. Clair).

Also, In This Week hooked up with Brooks in Charlotte, to talk about band, the band members and of course about the upcoming record. Here are some interesting and funny parts taken from that interview:

"I've always been in bands where the members are a decade or two older than me, so I'm used to most of my friends being a lot older. I grew up fast. Socially, it's smooth sailing for the latest Bad Religion lineup. Jay Bentley is the loudest voice in the band. The funniest guy is Brian Baker. I have the driest sense of humor. Greg Hetson is funny -- just a different type of funny, maybe more subdued funny. Graffin has the brains. Brett has the brains, too, and he brings the good vibes. But with any band, there was still a musical get-to-know-you period."

Of course the question arises what the new album is going to sound like, since New Maps Of Hell found the veterans treading out into unchartered territory for the band -- acoustic guitars. After decades of visceral pummeling, Gurewitz and Graffin offered up a few acoustic versions of album tracks as well as some bonus ballads for the deluxe edition of "Maps." Brooks answer on this subject: "Never say never, but I don't see that happening. As of right now, our intention is to keep plugged-in. But you never know, we could make it really sensitive on a bridge and bring in the 12-string."

After a long drive from North Carolina, the tour arrived in Florida for a 3 day stay. The setlist of the second Florida show, in West Palm Beach, almost seemed to be dedicated to The Process Of Belief since 4 songs out of 16 came from that album: Supersonic, Prove It, Can't Stop It and, of course, Sorrow.

Ever wondered how Brooks experiences a show? Watch the next video and imagine you're the one behind the drum kit.

After many US tourdates (of which we unfortunately have not much to tell about), the Warped Tour crossed the border once again. Thrash It Out Online managed to catch Jay and Brooks in Vancouver for an short, but interesting interview in which the guys share their opinions on the music industry, the longevity of the band and, of course, about the upcoming 15th album next year:

"According to Bentley the reason why Bad Religion has lasted the test of time is because they write music for no one but themselves. They pride themselves on not following the latest trend or fad. Instead they stick to making the music that they want to play.

"Really this is just a hobby gone completely insane," says Bentley. "This was never a career opportunity, this was never meant to be a job. It was never meant to last 30 years. There is something that happens in this band for us that will keep us playing for as long as we can whether were popular or not." [...] "The band has had various member changes over the years but both Bentley & Wackerman agree that Bad Religion has never sounded as good as what it does at present. Both can't wait to work on their 15th studio album due out next year. Supposedly, it will contain what they describe as 'guttural hints' along the same lines as The Devil Wears Prada. The record will still have that distinct sound that they are renowned for, but with a slight twist."

After having spent three days in Canada, Bad Religion headed towards George, Washington and Portland, Oregon for their last shows of the tour. And for those of you who couldn't attend the Washington show (or any Warped show) here's a link to a bootleg of that show at the Gorge Amphitheater. Many thanks to ikillkenny for sharing it!

Think Before You Gorge

During the Warped Tour, many blogs, interviews and reviews have been read while searching for news. Many times we bumped into terrible mistakes and errors; some are funny and some will really hurt the true Bad Religion fans. However, we still want to share them, so here's a top 3 of the worst mistakes we came across the last couple of weeks:

#1. Jay Ziskrout playing again with Bad Religion at the 2009 Warped Tour, by alexramon.com
#2. Gary Graffin, the band's lead singer [...], by Back To Rockville
#3. Brett Gurewitz playing at several Warped shows, too many to list them all here...

And to all fans, here are Jay's final words from Warped 2009:

"well... we made it through another adventurous summer with fatty and smelly, eric, hefe, the jakes, the souls, flogging molly, will aiden, jeffree starr and cousin whateverhisnamewas... whew. there was SOME good music, even a couple of surprise acts on the kevin says and hurley.com stages... bayside were awesome.
just really wanted to take a moment and say thank you to everyone who came out and braved the weather (hot, cold, wet, dry, lightning... you name it we had it! how about that hail denver?!?!?), made it fun, threw crazy shit onstage... made me laugh. thanks!
i'd also like to say thanks to the people who were singing along and yelling out shit in chicago recently!!! seats are always a tough gig for us, so it's nice to hear that perfect blend of "generator!!!" along with "you suck!!"... a very healthy balance indeed. we really have had a great time so far this year, a couple more shows here and there, off to australia with the nofx's and bobs yer uncle.

thanks again everyone who sang, threw shit, yelled shit, clapped, screamed, boooed, and generally made us feel right at home. it is genuinely appreciated.

Extra tidbit: According to an anonymous source (*cough*Starbolt*cough*), all 6 members will be present on stage at the 15th Anniversary Celebration Event of the Warped Tour on September 6.

Reported by: ikillkenny, Jacaranda
Tags: warped
Add a comment
Please keep your comments on topic. Off-topic discussions can be continued in our forum.
You don't have to be logged in to add comments. However, to prevent impersonation it is recommended.
Click here to log in or register.
User comments (14)
Search news
Related news items