Even though the year hasn't ended yet, it's safe to say that 2009 has been a pretty busy year for the band: the Punkspring Festival in Japan, the Extremúsika Festival in Spain, the Warped Tour in the U.S. & Canada, the Pearl Jam shows in Chicago and Philadelphia, and, of course, the Australian Tour. It's quite understandable that the band needs some time off before getting back in the studio to record their next album.

The final gig of the year (probably) is the We The People festival. Bad Religion will be headlining this event, which will take place outdoors in the streets of downtown Los Angeles. Other bands that will show up as well are the Suicidal Tendencies (Brooks' former band), Pepper, Madvillain, Flobots and many more. The main mission of this music, arts and cultural festival is to promote 'non partisan, non violent, environmental and politically conscious views' and 'to embrace the ever expanding vision of communities worldwide, the We the People festival proudly continues its effort to promote cultural unification and greater social awareness to audiences everywhere.'

The first shows for 2010 have now also been confirmed. In March there will be two shows at the House of Blues in Las Vegas. The band will be performing March 26 and 27.

More details on the House of Blues website: March 26, March 27

Always wanted to know what it was like for Greg Graffin to grow up in Racine, Wisconsin and Los Angeles, California? Want to know what 'Jesus Christ Superstar','The Jackson Five' and Elton John' have in common? Do you just want to know more about Greg's musical preferences and his academic career? Well, then you should read the following interview by the Racine Post. [The link doesn't appear work anymore. Click here to read the interview in a txt file.]

Here's a little preview of what you can expect:

Q: "When you moved to California, what were some of the things you noticed about the atmosphere?"

A: "California was a world away from Southeastern Wisconsin, both culturally and geographically. I moved there to enter 7th grade and all my classmates seemed more mature. They did mature things like smoke weed,, have sex, and talk with a lingo that said "surfer inside". The chicks seemed a lot sexier and more mature, but that could have been because I was now in junior high, but they dressed much more luridly. I remember asking a girl who was way out of my league if she wanted to go get an ice cream cone. She just rolled her eyes at me. Back in Wisconsin, I would have had success with that invitation!"

This first interview was done when Bad Religion was in Montana during the Warped Tour. Brooks talks about the new breed of bands at the Warped Tour, PickRSet, the band's favorite songs and more.

When Brooks is asked about if Bad Religion plays everything fans request, he replies: “We don’t want to please too many people! Because it is punk and that kind of goes against the whole punk ethic. It’s a compromise. Usually the songs people want to hear are at least half of the songs we normally play on our set-list. We’ll get the b-cuts here and there for the two people that want to hear the songs.”

And regarding the new 2010 album, he had this to say: "Yes, Brett and Greg have already started work on some new material. I’m yet to hear any of their ideas but when we get back from Australia and New Zealand we’re going to start pre-production on the next record. It’s just a matter of getting the songs together and making the best record we can. But in 2010 we’re definitely releasing a new album.”

Here's another interview in which Brooks talks about his other band, Kidneys.

"The fact that it (Kidneys) doesn’t sound like BR is a good thing,” he says. “I think if I did write like Brett Gurewitz and Greg Graffin, people would say, ‘Those guys do it better than anyone else anyway.'" 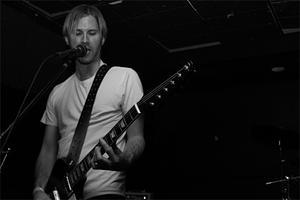 Every die-hard BR fan already knows that 21st Century Digital Boy was inspired by King Crimson's '21st Century Schizoid Man'. A while ago the original song was re-recorded and re-released by the human experimente.
Besides that, Activision recently released the original King Crimson version of the song as a playable track for the 'Guitar Hero 5' videogame. A preview of the new version of this song can be found right here.
If you want to know more about 21st Century Digital Boy, check out The Answer.

For quite some time now, Bad Religion have been fans of FC St. Pauli, a soccer club from Hamburg. The club is known for its left-wing following and its fans, who have made the skull and crossbones the second official logo of the club.
The club is going to celebrate its 100th anniversary next year. In the official anniversary book "FC St. Pauli. Das Buch", which just came out, Bad Religion are quoted twice.
In the foreword, Brian Baker is quoted with an advice when he was told about the project. He said: "Just do it like the US history text books: glorify the biggest victories and omit all the defeats!". According to the author of the book: "(...) this made a great punch line for us since the club has never won anything - had we followed Brian's advice, the book would have turned out VERY thin ;-)".

And in the chapter on how the skull became the second official symbol of the club, Bad Religion are quoted saying how in the US the skull stands for punkrock and that that is one reason why they have sympathy for the club.

More info on the book at: http://www.fcstpauli.com/dasbuch

Thanks to Bruder Michael for this news. Michael is also the author of the book, by the way.

Extra tidbit (taken from The Answer) - Though BR is mostly a hockey team, they have played several soccer matches over the years, while on tour. They had a charity match on August 31, 2000, in Hamburg, Germany, BR and crew and fans and FC St.Pauli ex-pros against the 3rd team of FC ST.Pauli. The whole thing was in the local press a lot, 300 people showed up, BR & friends lost 2 : 4 (Jay made 2 fatal mistakes), and the revenues went towards a youth project in Hamburg/St.Pauli.

Reported by: Bruder Michael, Nelson, Jesse, Marty
Tags: show, interview, festival, book, house of blues, Minor League
Add a comment
Please keep your comments on topic. Off-topic discussions can be continued in our forum.
You don't have to be logged in to add comments. However, to prevent impersonation it is recommended.
Click here to log in or register.
User comments (8)
Search news
Related news items