Greg had tweeted about this several weeks ago and he and Brett had also mentioned it in passing during their live interview with the Huffington Post:

The American Humanist Association's Legal Center got Vista Peak High School from Aurora, CO to reverse course and allow a student named Matthew Halbig to wear the crossbuster T-shirt again after sending a letter alerting them to a serious violation of the First Amendment.

According to the kid's report, the school's Director of Operations and Management had ordered him to remove his T-shirt and threatened to suspend him and arrest him if he did not comply. He was told that his shirt violated the school policy against "disrupting the learning environment".

You can read the full letter sent to the school administration to learn more about the arguments presented by AHA's Legal Center (including many references to several supreme court rulings on similar incidents).

Have you ever experienced something like this in your school? Now you know, you can contact the folks at AHA or better yet read that letter, get informed and next time you can present those arguments yourself!

By the way, for those familiar with the Bad Times newsletter, this case must have reminded you of one of the letters published in the From the Mailroom section in Bad Times issue #10, sent to the band by none other than our very own Darwin at Work (fellow BRPager)! More than 10 years have passed yet it seems some things don't change...

This had been Greg's reply to Darwin at Work at the time:

"Dear Mike,
This is a typical example of scared americans over-reacting to someone's intentions to provoke thought. I don't want you to get in trouble, but also understand that the people who punish you for wearing that shirt are afraid, they are little scared people who like to pretend they are enforcers (when in reality they are powerless to enforce anything but the most petty rules). Thanks for buying the shirt. Do what you feel is best. If you want any of your teachers to get in touch with me, I would be happy to explain to them that wearing and promoting that symbol won't be the downfall of America.
Sincerely,
Greg Graffin" 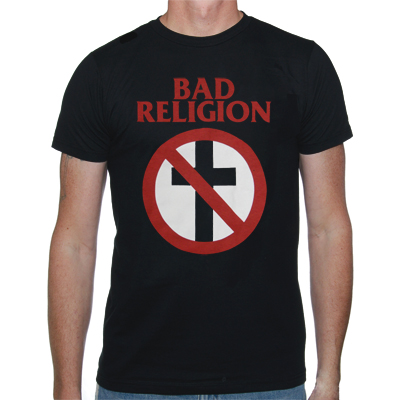 Reported by: Greg Graffin
Tags: crossbuster, shirt
Add a comment
Please keep your comments on topic. Off-topic discussions can be continued in our forum.
You don't have to be logged in to add comments. However, to prevent impersonation it is recommended.
Click here to log in or register.
User comments (3)
Search news
Related news items