More interviews as the band continues to promote the new album.

First there is this great interview Jay did with AMP Magazine in late December that only got published a couple of weeks ago. Not only does our favorite bassist discuss True North, ealier albums and fatherhood, but like Brett he reveals himself as a huge Elton John fan, among many other interesting things. Some other personal highlights of this awesome interview:

"When we go in to make a record, the thought is, “This is going to be the best record we’ve ever made.” We’ve all said if you’re not going to make the best record you’ve ever made, then why would you make it? I’ve been a part of records that were good, that were bad, and I’ve been a part of records that were actually indifferent. To make records now at this stage in our career, there is no reason to make something that you don’t think is the best thing you have ever made. Obviously that is subjective, and once you have made the record and sent it out on its own path, people could say, “This record sucks!” and that you are no good anymore, but that is not why we do it. We go in and think, “Oh man! This is great!” Being together for so long gives you sort of a map of how you do things, and I don’t want to say efficiently because that sounds to scientific. We know how we work best. We’ve learned over the years and we go in to make a record and if we spend too much time, we are going to fuck it up. It just keeps getting worse and worse and worse. At the same time, when we made Suffer, we recorded and mixed that record in seven days. We are never going to be able to do that again. We sort of talk about it, but we’re not going to be able to do anything in seven days. It’s just not going to happen. We’ve kind of learned how to get the best end result that we want, without everybody just sort of either forgetting what it is that we’ve done or you play it so many times that you suck the life out of a song. With this record, Brooks [Wackerman] had a small window where he was off tour with TENACIOUS D, and told him, “Come on out here! Let’s make a record!” Then all the guitars went on and then the singing and everyone was happy. Then Brett mixed it and everyone was happy. And okay! We’re done!"

"When Brett left the band in 1994 and we went and recorded The Grey Race, I listened to that record and I said, “This will be the ultimate sleeper.” People won’t get this, maybe forever, but this is a really great record. There is something about that record, to me, that was the ultimate, ultimate sleeper. [Laughter]So I’m still waiting for people to go, “Oh man! That’s such a great record!” The only reason I say that, it isn’t really scientific, it is a little bit more anger. When we recorded Suffer, the general consensus from all the press was, “This is the greatest record ever! You’ll never top it.” We were really fucking angry and we went in and made No Control and they went, “WOW! This is the greatest record ever! You’ll never top it.” Well FUCK THEM! We went in and did Against The Grain, and while we were recording it, Brett almost had a nervous breakdown because he was so focused on itbeing better than No Control or Suffer that he almost wasn’t paying attention to the Against The Grain record! He was listening to No Control or Suffer and going, “Fuck this has to be better!” He finally said to us, “Hey I’m freaking out. We just need to make records and not worry about whether people or how people compare our materials to our old materials. It seems like we can’t win.” That was how we started thinking that no matter what we did, the people are going to think it’s not as good as this and we can’t be caught up in that because that can really destroy you." 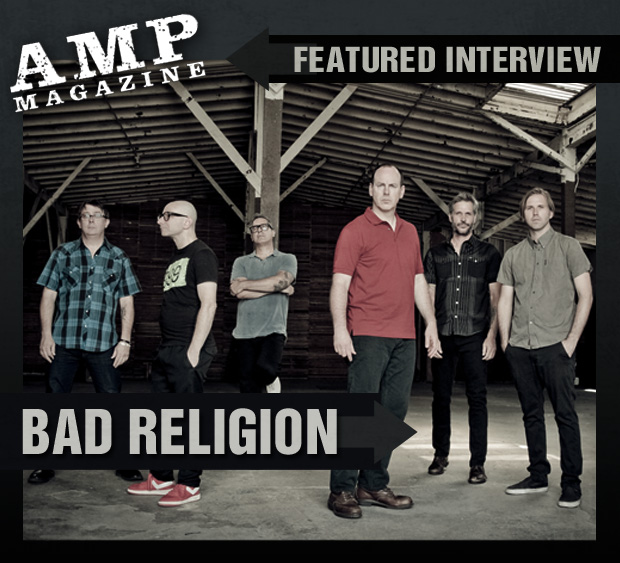 There is also this interview Brian did with Toronto-based music website BLARE after their gig at the Metropolitan in which he talks about the new album, Bad Religion's 30 years career and the driving force behind their consistent output after so many years, punk rock as a music genre, the current trend of band reunions, etc.

"Attention to detail in songwriting is really, really important and having good songs begets longevity and allows relevance to flourish. The simple fact is that Brett and Greg are really fucking good songwriters, and that’s why this works. If the songs weren’t good, we’d be a heritage act. If those guys didn’t express themselves lyrically and musically every 18 months or so, in a way that was cohesive and relevant, this would turn into a caricature of what it once was. I think that it is only because of those songs – and the timing of the way they think – they’re pretty special guys and I can say this because I don’t write anything. I play guitar and they write."

"You’d have to assess that on a band-for-band basis to determine whether the goal was profit, recapturing youth, or whatever. I found that bands who were very popular and stopped because they didn’t need anybody anymore and then reformed – bands like Blink-182 – is because they ran out of fucking money. But that’s okay, there’s nothing wrong with earning a living playing music – take a note Fall Out Boy – it’s fine, it doesn’t matter. There’s nothing wrong with reforming a band because someone is no longer angry at a member that caused them to quit the band because they could no longer play with that guy. Nostalgia is a great reason too, there are no rules here. People tend to assume, especially with bands that people have heard of, that the entire goal of that band is to continue to earn. They take out the entire point of it, which for me is that music is fun to play."

Reported by: Marty, Brett Religion
Tags: interview, Jay, brian, Blare, amp magazine
Add a comment
Please keep your comments on topic. Off-topic discussions can be continued in our forum.
You don't have to be logged in to add comments. However, to prevent impersonation it is recommended.
Click here to log in or register.
User comments (6)
Search news
Related news items