Minor League news #22 | The Bad Religion Page - Since 1995
Quote of the day: "And trash piles high in the rubble we forgot. The angels of our nature just sit and watch it rot." - Past is Dead
Minor League news #22
Home > News from the front
Join discussions about this news in our Group on Facebook

Update (3-12-2013) - After almost a month, the second half of the Loudwire interview was finally posted! In this part, they share some interesting details about their trademark vocal harmonies, they discuss past musical projects (Brian gets to talk about Minor Threat and Brooks is asked about Bad4Good) and they answer who their biggest musical influences are. Brian definitely steals the show!

Last time it took a whole year for a new issue of Minor League news to come out. Well, sometimes we like to spoil you a bit so we thought we'd bring you issue #22 a little sooner: Loudwire interviews the band and picks True North as one of the best 2013 songs; Bad Religion featured in exclaim! magazine; Dutch band on a mission to open for Greg and co in Groningen; winner of "guest for life" contest; Hetson's new side project; Brooks on tour with Blink 182, and more!

Loudwire, who had many good things to say about the new album in their review last month, had Jay, Brooks and Brian (or was it Hetson?) stop by their studio for an exclusive video interview. They discuss True North and the standout tracks, religion, and Brian even reflects on Scientology. Here's the result, with a second part to come out soon!

Loudwire also picked the title track True North as one of the best 2013 rock songs (so far) along with Hollow in December (Alice in Chains), Earth Rocker (Clutch), Cut Me Some Slack (Paul McCartney, Dave Grohl, Kris Novoselic + Pat Smear), Youth Wasted (The Bronx), Do Me a Favor (Stone Sour), and Bohemian Rhapsody (O.G. mix) (Puscifer). This is what they had to say about Greg's song:

‘True North’ is the title track of Bad Religion’s 2013 album, and the old school feel of the song takes the listener back to the days of ‘Suffer’ while remaining crisp with the theme of perfecting one’s moral compass.

February issue of Exclaim! Magazine (Canada) has the band in their Timeline feature "documenting their beginnings as high-school misfits to a band who have remained consistently great for almost the entirety of their 30-plus-year career". 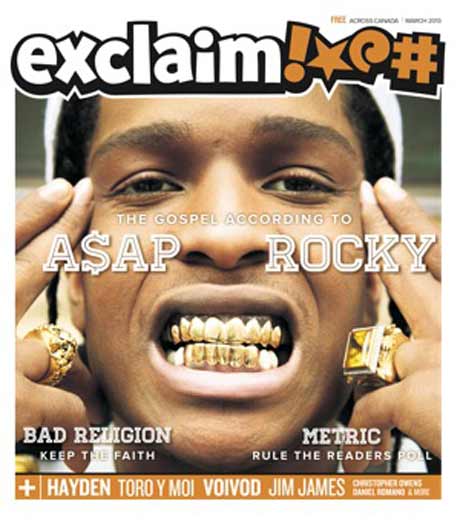 Like Loudwire, exclaim! also had a positive review for the new album last month. In addition, they have listed online "five noteworthy facts you may not know about Bad Religion" (that is, if you have never visited TheBRPage or read The Answer, I might add). These two are the less known ones I can think of:

3. Until the release of Suffer in 1988, the band rarely toured outside of California.

Bentley and drummer Pete Finestone are eager to tour, but guitarist Brett Gurewitz and Graffin aren't. Complicating matters, Graffin continues to spend his summers back in Wisconsin with his father, effectively putting the band on hiatus for two months a year.

Graffin appears as a guest on Bill Maher's Politically Incorrect alongside Star Trek: The Next Generation star Marina Sirtis, author Christina Hoff Sommers and actress/comedienne Julie Brown. The topic of the episode is feminism. Graffin barely gets a chance to speak.

Hoist the Colours are huge fans of Bad Religion

Hoist the Colours, a Dutch punk rock band, recorded the NOFX song "I'm a Huge Fan of Bad Religion" as they'd love to open for BR in Groningen on June 2. Here's what they have to say about it:

"We heard that Bad Religion, one of our all time favorite punkrock bands, is playing our hometown and we would love to open for them. So we did the logical thing... and recorded a NOFX cover. Makes sense right?

You know, bands like Bad Religion only play once every couple of years in the Netherlands. And when they do, they only do a show in Amsterdam. So this is a big thing for us. Don't worry it's not about getting free tickets... we may be cheap-asses, but we already bought our tickets to see the show.

Share this video as much as you can, and maybe.... just maybe we have a small chance to open for these legends."

Support them on their mission and share the video!

Remember this awesome contest Record Store Day and Bad Religion were running for some lucky winner to be on their guest list for life? Well, the winner hasn't been officially announced but he was kind enough to post a comment and let us know, even thanking TheBRPage because he had actually learned about the contest through us. That made us proud. Now go make friends with him to be his guest!

So this makes now two guests for life, the other contest previously held in 1998 for fans who had bought No Substance and answered correctly the three questions in the CD insert of the No Substance Limited CD that was given away as promo with the record. I wonder who or where the other lucky son of a b... is... In case you didn't know, Hetson has yet another side project. Besides recording and touring with Bad Religion and Circle Jerks and playing guitar in Punk Rock Karaoke, last year he joined G.F.P with Tom Paul Davis (Crazy Tom) from DFL on vocals, skate legend Tony "Mad Dog" Alva on bass and former Suicidal Tendencies drummer Amery"AWOL"Smith. Those who follow Hetson on Twitter will know they're currently touring South America. 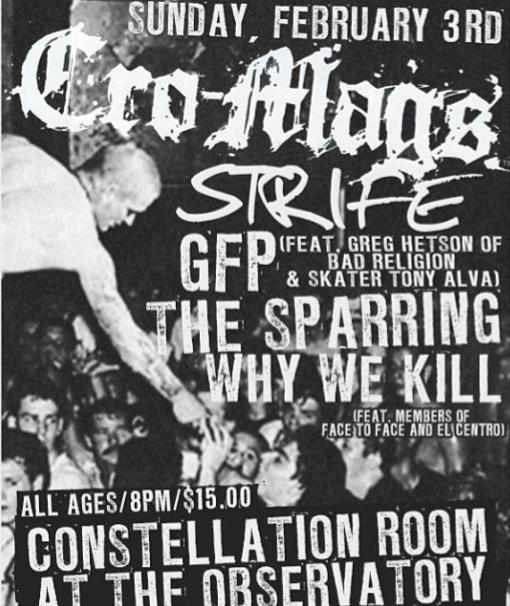 Greg and GFP live in Chile. He stands on Brian's spot and is even allowed to use the mic!

Brooks on tour with Blink 182

In our previous issue we told you Brooks would be filling in for Travis Baker as drummer during Blink 182's Australian shows for the past two weeks. Curious about how that went? Here's some pics and Brooks showing off his skills.

Also, make sure you check out this one as well! 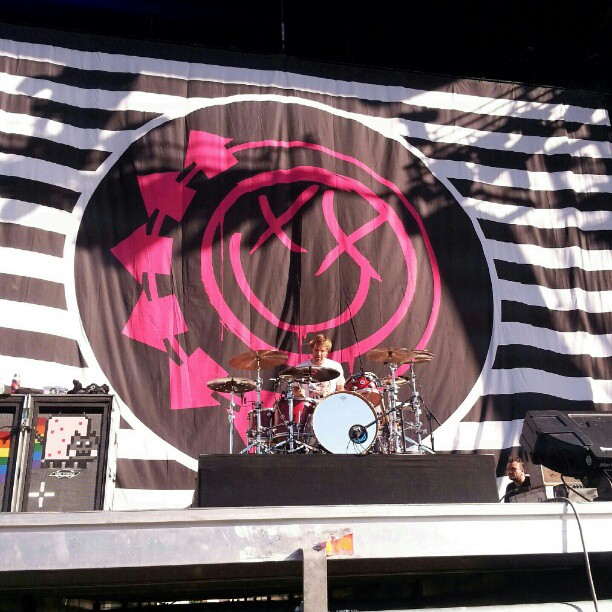 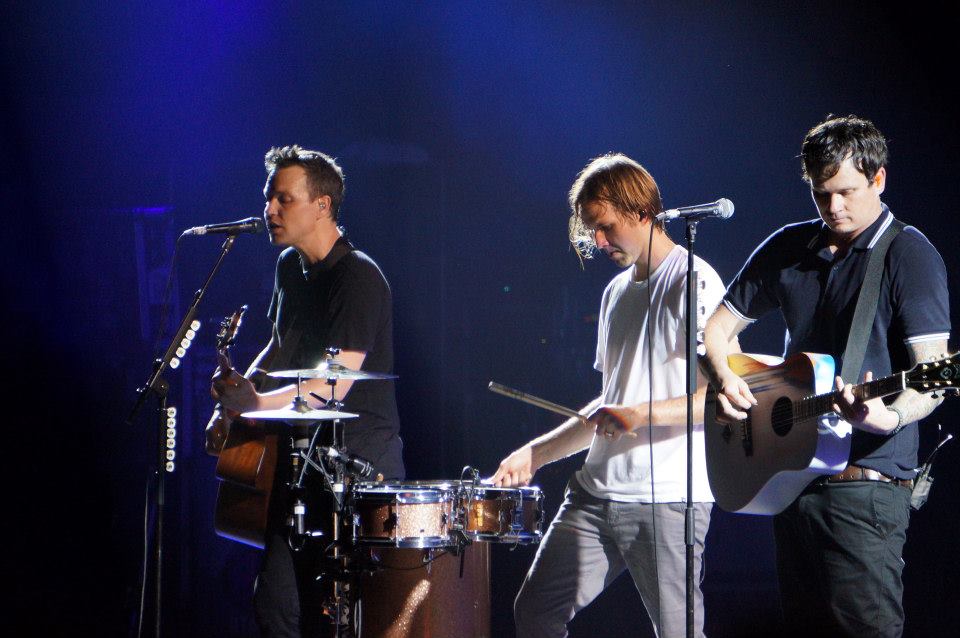 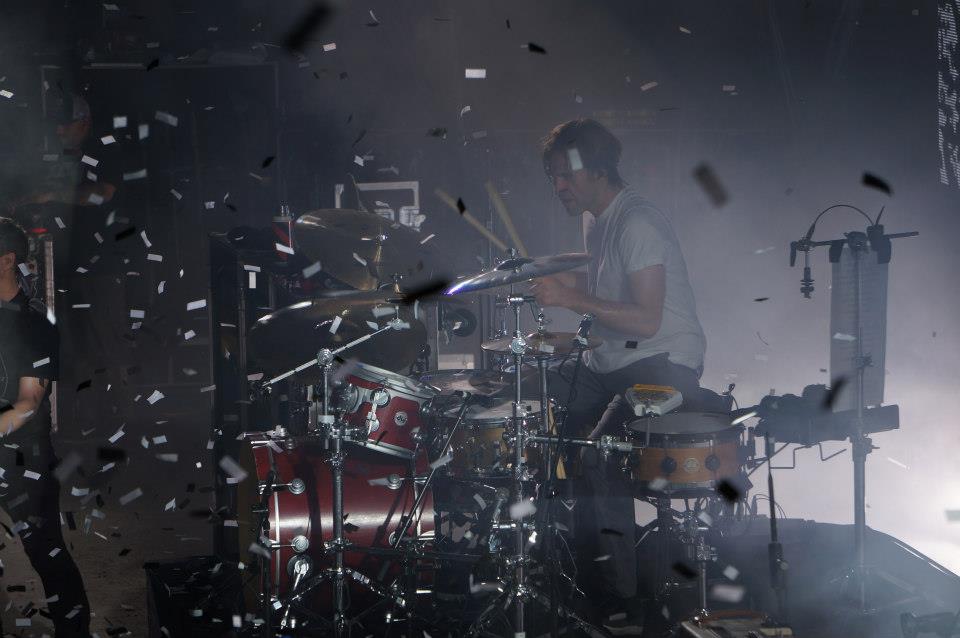 Brooks with Blink 182 live in Melbourne

Extra tidbit: This is not the first time Brooks has subbed in for Travis Baker. The first time being in 2000, coincidentally for one of the shows Bad Religion had opened for Blink 182.

Also, talking about side projects, Brooks was recently a guest on a set of songs from Farmikos, the new band led by former Ozzy Osbourne and David Lee Roth guitarist Joe Holmes. Two of those songs can be streamed at Farmikos.com. Holmes is joined in the new group by former Laidlaw singer Robert "Robbie" Locke.

Trivia: Lastly, and back to what really matters, which is Bad Religion, in case you didn't know in 2011 Brooks officially became the longest-running drummer in BR history after Bobby, and Pete. How time flies! It only seems like yesterday when TheBRPage first leaked the news that Brooks would be joining the band after Bobby's career-ending injury.

We have implemented a new feature to help keep better track of new comments to past news items. Now when you enter the news archive you will find a "Latest comments" tab on the right listing the last fifteen news stories that have received comments.

TheBRPage news archive dates back to 1997. Now you can fully explore it and make comments that will get noticed!