Minor League news #23 | The Bad Religion Page - Since 1995
Quote of the day: "If you share these beliefs you know I wish you well 'cause there's no room left in heaven and there's sure no room in hell." - Big Bang
Minor League news #23
Home > News from the front
Join discussions about this news in our Group on Facebook

Over a month later, time for another issue of Minor League news: articles and interviews galore, covers, Greg featured in new UCLA spot, Brooks nominated for drummers award, and much more! 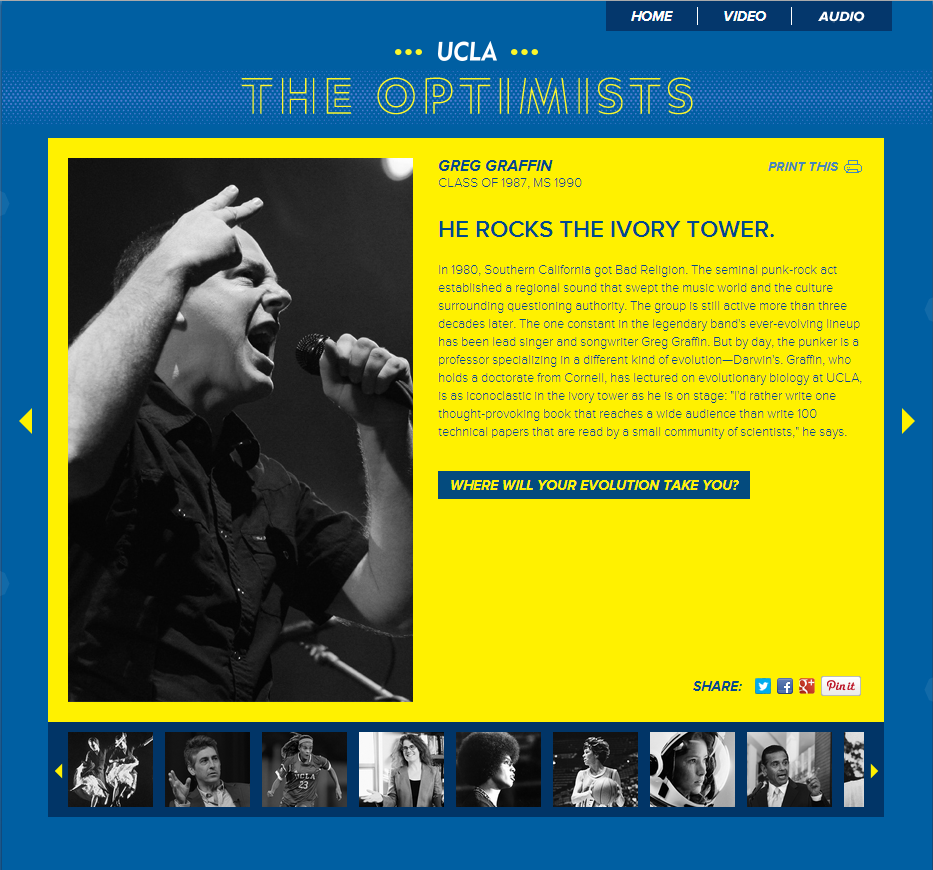 Melissa Fossum wrote a very comprehensive article chronicling Bad Religion's discography for the Phoenix New Times.
http://www.phoenixnewtimes.com/2013-04-18/music/bad-religion-experiences-a-punk-renaissance/
Another Phoenix native, James Callahan aka Jaime' En Fuego aka The Automatic Man, also wrote in his own way a comprehensive article covering Bad Religion's output. Let's see how many references you are able to count!
"Come Join BAD RELIGION On The Changing Tide
Longevity validates legitimacy!
When a band of Wrong Way Kids' Supersonic creations can seriously stand the test of Time And Disregard in the planet's pantheon despite the best efforts of the 1,000 More Fools born every day, instead of dissolving into utter Mediocrity, that truly sends a resounding message In So Many Ways. And while it is What It Is that artists with No Substance in the Land Of Competition and Endless Greed like Katy Perry and Nickelback can manage to Get Off on All Fantastic Images of The Fast Life longer than many ever wanted or expected (but oh, What Can You Do?), there's others like the always Looking In melodic hardcore architects in BAD RELIGION, who worry the devoted Leaders And Followers of their Forbidden Beats during every calendar into their three decade career that Slumber will come soon as they finally give an Honest Goodbye and Walk Away leaving the World Without Melody of such a unique variety. Continuing may seem like Too Much To Ask from a group that turned 30 In 2010 to continue revealing Shades Of Truth Along The Way but the last thing BR are currently prepared for is to Cease turning over a New Leaf and maintaining Against The Grain during Operation Rescue..."
http://www.examiner.com/article/come-join-bad-religion-on-the-changing-tide?fb_source=feed&ref=m_notif&refid=52&notif_t=like#_=_

The thumbail pic for this Minor League news issue is a photo by Scott Legato that made Rolling Stone's Hottest Live Photos of 2013 feature.

Drum! Magazine nominated Bad Religion's now longest-running drummer in the punk drummer category. Online voting is now closed and winners will be announced in the August 2013 issue of the magazine. He also had his Zildjian Natural Finish signature sticks in the Gear ballot for this year.

Power-pop band from Canada Sloan is set to release a new 7-inch that will come with a downloadable 12-song covers album featuring Bad Religion's classic We're Only Gonna Die as the last song.  Here's the full tracklist.
1. Gas Chamber (Angry Samoans)
2. Filler (Minor Threat)
3. Gimme Sopor (Angry Samoans)
4. Bully (7 Seconds)
5. Retrospect (Gray Matter)
6. Catalina (Descendents)
7. Fountains (The Nils)
8. This Is the Angry (7 Seconds)
9. Hot Cars (Angry Samoans)
10. Nervous Breakdown (Black Flag)
11. Wasted (Circle Jerks)
12. We're Only Gonna Die (Bad Religion)
Speaking about covers, you should check out this super medley of covers from the now extinct Your Mother. This song first appeared on their CD album One Big Inside Joke from 1995 and also made their 7'' Sometimes Scott Jones is Our Roadie from 1997.
Lyrics below in case you feel the urge to sing along:
Hello, my name is Greg, I teach at UCLA and I'm the singer for a punk-rock band. I write three-chord songs that sure aren't very long and use big words no one understands. And my bands' been around for days, that's why we have guarantees. "I've seen a lot of things in 5 years. I struggle just to hold back the tears, but every-fucking-where I go..." little brother, don't you know that I follow all emotion with a "fuck"? My hairlines receding rapidly, but I still go Against The Grain and screw society. Mr. Brett's a millionaire and icon for the businessman, and our generation will follow. We're no simpletons, not Bad Religion, but I hope you don't think we're lame 'cause all our songs sound the same. I always loved punk rock, now I got my Ph.D.; we'll never prevail with simplicity. Blender! 6, 9, 4, 12, 18, 7, hike! All harmony makes big money. Voice of God is Government; Fuck Armageddon. How Could Hell Be Any Worse? Just Suffer listening to my big words, I'm just a impulsive thesauratic entity. Go To Hell With Superman. And I'll count in all of our songs. Our words and music are interchangeable, before too long... major label, because by then we'll be the mainstream. Gang-bang, big-brunch, you know there's no free lunch. Sometimes I like Captain Crunch, but right now I feel like...

One of our forum and shoutbox regulars Neil Davis aka ¿? recently took to breaking down the eras of Bad Religion's 33-year career. Here's the timeline he came up with. Agree, disagree? I think it's pretty much spot on! 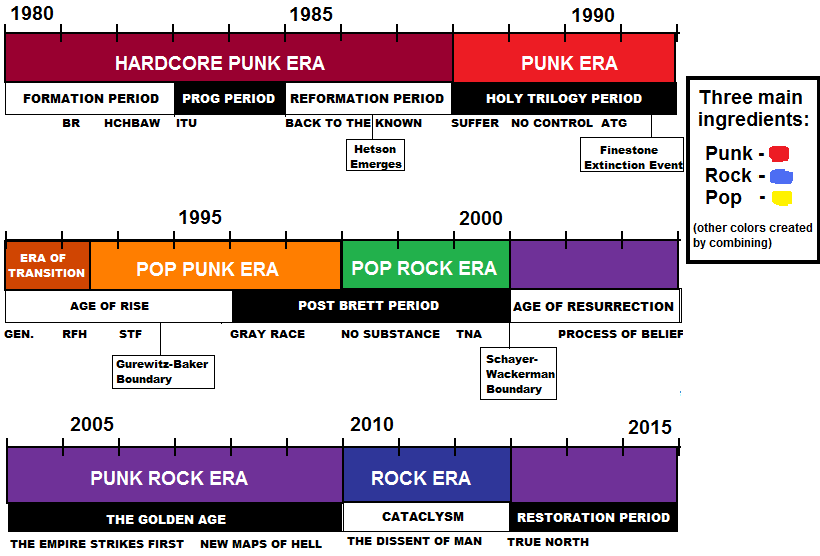 As you might know by now if you read our forums regularly, Greg Hetson has missed the last few weeks of the tour. For a few days there was a mix of rumors which Jay was kind enough to dispel in our forums. Mike Dimkich of The Cult fame is filling in for Hetson and will most probably be playing in the European tour as well.
By the way, It's not the first time this year that a band member has missed some shows. Due to personal reasons, Brooks missed a few dates as well in early March. Polar Bear Club's drummer and big Bad Religion fan Steve Port had childhood dream come true as he stepped up for the challenge to fill in for Brooks. Here's a good article about his experience with the band.
http://www.syracuse.com/entertainment/index.ssf/2013/03/polar_bear_club_drummer_bad_religion.html
Reported by: Brett Religion, Marty, Jesse, charlieplaysdrums
Tags: Jay Bentley, Greg Graffin, Greg Hetson, Brian Baker, brooks, interviews, Minor League, Polar Bear Club, Rolling Stone, articles, UCLA, Optimist, spot, timeline, The Cult, Mike Dimkich, Steve Port, Drum!, Drummies, award
Add a comment
Please keep your comments on topic. Off-topic discussions can be continued in our forum.
You don't have to be logged in to add comments. However, to prevent impersonation it is recommended.
Click here to log in or register.
User comments (13)
Search news
Related news items