In 1983 they were getting disillusioned with the punk scene, because it wasn't as open and accepting as in 1980. According to Greg Graffin, around late 1982 it started to get a gang mentality; so since the scene let them down, they in turn (Greg thinks in retrospect) let the scene down too, by going into the studio and doing a record they just wanted to do, without worrying about the constraints of their style, and not worrying about the marketing.

Brett and Greg hired the producer Thom Wilson, who took them into a studio called "Perspective Sound" in Sun Valley, Ca. Tom Wilson quits after the first or second day of producing so they get Jim Mankey again.
Brett bought Greg a Roland Juno 6 synthesiser and Greg used it to write all his songs on Into The Unknown, which Brett now hates. Greg: "I was a kid, who didn't have any concept of historical constraint or how to make your audience happy. I was just doing what I wanted to do".[1]
Jay Bentley left the band while still recording the first song. "I was in the band for half of the first song, and then walked out in the middle of it. I wasn't really interested in pursuing a progressive rock career."
Jay: "At the time there wasn't much of a scene left in L.A. It's exactly what a 17 year old punk would do, go against the grain. It wasn't so much courage, as it was what was stated in the opening, he [Greg] and Brett did it because they liked it. Well, and Brett was on drugs. hahaha. (...) It sounds like a band progressing musically, but it also sounds like a band doing something and not understanding the values of it. The only problem I had with the album musically [he quit BR as they started to record the first song], was (...) on the album he [Greg] just used one polyrhythm, so it was kind of monotonous. There was a lot of keyboard and monotony in there, he didn't change anything (...) I don't think it was the song so much as the attitude, the whole process of making the record was kind of backwards to me, it didn't seem right. We did one song where I thought 'OK, let's go on to the next song' but we spent the next eight hours doing overdubs, putting little bits and pieces on it. And I thought, 'Why are we doing this?' In terms of the sentiments of the songs and the content, the album was very Bad Religion, it was very similar to what had been done lyrically. The sentiment of the band hadn't changed, the only thing that had changed was the sonics".

The album was recorded in 1 week to 10 days.

The album was perceived by many to be responsible for the destruction of the SoCal punk scene, and Bad Religion was a pariah because of it.

It had 10,000 copies pressed. Jay said they were almost all returned, including one bootleg (they gave him his money back too). After they were returned, they put them in the Bomp warehouse (Brett worked there for a bit and was dating a girl from there called Suzi Shaw). Bomp sold most of the albums without telling the band. When they found out, they stopped it and Jay said only about 300 copies were left at that time (which he still kept in his garage in the late 90s and probably to this day). Suzy Shaw wrote a letter to Goldmine magazine about how she sold copies from the Bomp warehouse after Brett lived with her for a year without paying for anything, so she thought she had every right to do it. She was quite critical of Jay saying 9,700 copies were sold. She says it was like 2,000.

Bobby in 1996: "I heard it about ten years ago. I don't think it's as bad as many people make it out to be. I think for what it was out at the time, you know I think they had a lot of  balls to do what they did so now it seems like it is one of the bands most seeked out records."[3]

Graffin in 1996: "I think most fans of Bad Religion (...) wouldn't even hate it. It's just that certain people are very insecure about it. I'm not insecure about it and can relate it to a learning experience when I was young."[4]

Graffin in 1997: "I don't hate it. I think Brett hates it. I have nothing against the album. It would take a lot of work to re-release it."

Jay in 1997: "I have no problem with anything off that. It could have done without the keyboards, I suppose. (...) It's a good album by the wrong band."

Bobby in 1997: "If you like Todd Rundgrun, you'll love this album; it's very Utopia. Considering at the time it came out, I don't think it was that bad a record, it's just not. They could have called it the Greg Graffin solo album. It's a great attempt. It's the thought that counts [laughing]."[5]

Jay in 2002: "Brett and I burned a shitload of them one time. We just dumped gas on them and burned them. That was 3 or 4 boxes, that would have been 300-400. Last time I went looking for them they were all water damaged because my mom’s water heater exploded."

Greg: "I think ITU is like early REM; if it had come a couple of years later it probably would have been as popular as REM. That's the irony there. The keyboards were very straightforward, distorted sounding that mocked what the guitar was playing. There was still good song sensibility, but there was some ridiculous parts to the album too. All in all, because it's such a secret, people expect it to be an embarrassment, but it's not".

Jay in 2010: "It is true that Brett and I burned at least 3 boxes. That was at least 20 years ago, so I think we can move on from that. (...) No one in the band cares [about the album], at all. It is simply part of the band's history.
Was it embarrassing? Yes, for everyone. But most importantly it was a good lesson in humility, for everyone and it got us where we are today."

As of 2013, Into The Unknown is the only BR album Brett is embarrassed about.[6]

The album can still be found on the internet, e.g. on e-bay where it usually sells for 100 dollars or more.

Maximum Rocknroll Issue #9 (October - November 1983):
"This is the obligatory slag review. Basically, this new Bad Religion album totally sucks, unless you like slickly-produces early 70's wimp rock. After playing it, I hurled it out the window, into the unknown. (TY)"

The following ad can be found in Maximum Rocknroll Issue #8 (September 1983):

Christgau's Consumer Guide (Village Voice, December 27, 1983)
"Like a less musicianly version of the departed TSOL, this promising L.A. hardcore outfit has moved on to slower-tempo, organ-drenched hard rock that resembles nothing so much as late Hawkwind. Some may call it caterwaul, but I find myself moved by its anthemic ambition--and achievement. Conceptual clincher: the way they surround the dystopian-gothic tales and images--the kind of stuff that comes naturally to committed teenagers who know they're growing up but don't know they like it--with "It's Only Over . . ." and ". . . When You Give Up." A minus"

In Chuck Eddy's 1990 book "Stairway to Hell: The 500 Best Heavy Metal Albums in the Universe", Into The Unknown is ranked number 64.

So far, songs from ITU haven't been played often. Greg G. said they debuted the album at Mabuhay Gardens in San Francisco and even brought keyboards on stage. The audience consisted of just a few people.
Jay in 2010: "We have played PARTS of that song [Billy Gnosis] a few times, as well as Chasing The Wild Goose and some other stuff... but it's usually just a spontaneous verse or something... not an 'official' play of the song."
In 2010, they played Billy Gnosis as part of an 80's set.

Apart from a CD bootleg with the same artwork as the original, there is another bootleg CD with a drawing of a monster on the sleeve (on pink or yellow thin cardboard -i.e. there are two versions of the boot). Three song titles are incorrect and even Bad Religion is misspelled. It is produced by Devil's Double Records (former East Germany?). There is also a bootleg ITU which is also a 12" vinyl and has the same drawing as the original but has no "purple haze" out of the top corner but rather a blue one, in the same vein as the rest of the blue on it, i.e. it's basically bluer. And the lyric sheet is just like photocopy paper. It was released in 1992 by the label Rock Music.

Greg Graffin has the masters to "Into the Unknown" in his basement at home, and could remix it anytime he felt like it.

The cover art for Into The Unknown is an illustration called "Prolyx" by artist Ron Russell. It is, however, rotated 180 degrees. 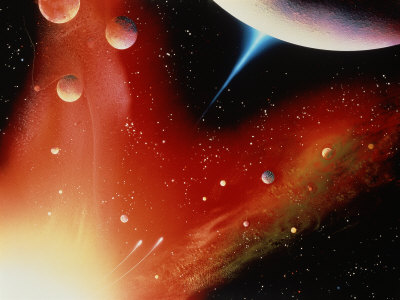 A band from Germany called Mars Moles released an album called Invite Punk Religion Back Into The Unknown. It's an LP with 16 songs, including all 8 songs from the Into The Unknown album in punk rock versions, plus 8 other songs on the B-side (including a Barbie Girl cover). The vinyl is multicoloured and limited to 100 - 200 copies (6 different variations). Great artwork; only available on LP.