Movies | The Answer | The Bad Religion Page - Since 1995
Quote of the day: "The other ways we're taught to fear, don't even scratch the surface of the problem here" - Leave Mine To Me
Movies
Home > The Answer > Movies
Join discussions about this article in our Group on Facebook

There is a Bad Religion sticker on a mirror frame.

There is a fan exiting the venue at the end wearing a denim vest with Bad Religion and a crossbuster on the back.

Wetlands (2013) (imdb)
The lead character wears a crossbuster t-shirt for a large portion of the film.

Rock of Ages (2012) (imdb)
There is "Bad Religion" written on the marquee of The Bourbon Room, a fictional club from the musical this movie is based on.

The Dictator (2012) (imdb)
- Unverified! May be only in the theatrical cut of the movie -
At the beginning when The Dictator arrives in America, a series of marquees of events is shown. "BAD RELIGION" is on one of them for a quick second or two.

Scott Pilgrim vs. the World (2010) (imdb)
There is a New Maps Of Hell poster on the wall to the right above Scott when he and Knives are in the music shop for the first time. It's very blurry, and only shown right before the scene cuts.

The Sentimental Engine Slayer (2010) (imdb)
A rolled-up BR poster can be seen on the dashbord of a car. The movie was directed by Omar Rodríguez-López, the guitarist and songwriter of The Mars Volta.

Eyeborgs (2009) (imdb)
Live versions of both 21st Century (Digital Boy) and Los Angeles Is Burning are being played. It's not clear where the songs were recorded, but they're definitely not from the Live At The Palladium DVD.

Parks and Recreation (series) (2009) (imdb)
In "Rock Show" (1x06) there is a poster of New Maps Of Hell in the background for a few seconds when the characters are standing in front of a bar. 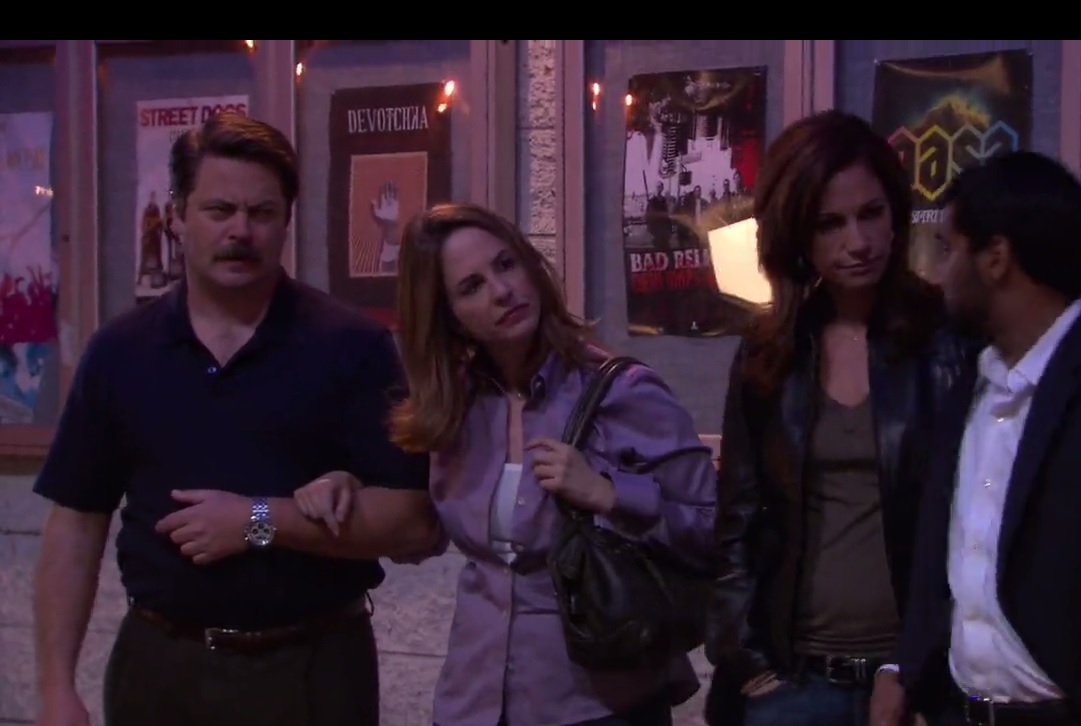 Las Vegas (series) (2008) (imdb)
In "Secrets, Lies and Lamaze" (5x14) Piper Nielsen is requesting Saturday night off because Bad Religion is in town and she has "killer tickets".

Strange Wilderness (2008) (imdb)
There's a The Empire Strikes First poster in the background.

Superbad (2007) (imdb)
There's a The Empire Strikes First poster in the background.

There is a CD of Recipe For Hate in the background.

Fifty Pills (2006) (imdb)
There's a The Empire Strikes First poster in the background.

Juno (2006) (imdb)
A crossbuster logo sticker can be seen on the inside of a locker.

Special (2006) (imdb)
Two The Empire Strikes First posters can be seen on the walls.

Dishdogz (2005) (imdb)
About ten minutes into the movie, you can see a poster hanging on one of the kitchen walls where the dishes were washed. It has several bands listed, including Bad Religion. In the middle of the movie, there is also a The Empire Strikes First poster hanging on the wall of Luke Perry's character's living room.

Kids in America (2005) (imdb)
There is a The Empire Strikes First promo poster on the wall of a character's room.

Cheaper by the Dozen (2003) (imdb)
The eldest boy's bedroom door has a Bad Religion bumper sticker written lowercase like on the Process Of Belief cover, and an Epitaph poster in red writing.

CSI - Crime Scene Investigation (series) (2003) (imdb)
In the episode "A Night at the Movies" (3x19) there's a group of kids playing with a gun. The one kid who then gets shot wears a Bad Religion T-shirt.

Gilmore Girls (series) (2003) (imdb)
In "Chicken or Beef?" (4x04) Zach, Brian, Lane and Rory talk about how it goes with rock 'n' roll to go to college. Rory then says: "Yeah, and, uh, Dexter Holland of The Offspring got his PhD in molecular biology at USC. Greg Ginn of Black Flag graduated from UCLA. The guy from Bad Religion got his masters in geology from UCLA, and he's working on his PhD in evolutionary biology at Cornell."

Helmiä ja sikoja (2003) (imdb)
This is a Finnish movie called 'pearls and pigs'. One of the lead characters wears a crossbuster T-shirt.

Stoked: The Rise and Fall of Gator (2002) (imdb)
Apparently, Sanity is played in this feature documentary film about a professional skateboarder.

The Ring (2002) (imdb)
A Bad Religion sticker is partially visible in Noah's locker in the A/V room; Gore Verbinski (credited as Gore Verbinsky) directed the 1994 music video for "American Jesus". Other stickers visible in the locker include those for Epitaph bands Pennywise, The Refused, Lars Frederiksen And The Bastards, and Descendents.

Lizzie McGuire (series) (2001) (imdb)
When Matt is giving out tickets for hall violations at school, the chorus of Portrait Of Authority is played ("Obsession", 1x16).

MTV Movie Awards (2000)
Before a commercial break, the guitar riff from the start of New America was played.

What to Do? (2000) (imdb)
Apparently, both Television and Incomplete are played in this short movie.

8mm (1999) (imdb)
In one scene as Nicolas Cage leaves a room and opens the door very faintly you can see the typical crossbuster poster, black with a red font and the crossbuster below the words.

SLC Punk! (1998) (imdb)
SLC (Salt Lake City) Punk! is a film about a couple of kids who become sick of their dull, ordinary life. They make plans to try to change things and create anarchy.
About three-quarters of the way through the movie, when the two stars are driving in a van, a crossbuster logo sticker can be seen on the dashboard. There's also a big crossbuster on the back of a kids shirt in the punk show scene of the movie.

Glory Daze (1996) (imdb)
This is a movie about getting old, starring Ben Affleck as the main character. It has an excellent punk rock soundtrack and there is a spectacular scene where "Ben" and his friends trash their house (giving it a "viking funeral" of sorts); during all of this violence, the original We're Only Gonna Die is played. They dubbed the original spooky intro to Fuck Armageddon to the beginning of it, leading up to the scene where they suddenly explode into violence. The end credits only mention We're Only Gonna Die, though. Strangely, on the CD soundtrack, they use Sublime's version of the song. Other bands on the soundtrack include The Vandals, Bouncing Souls, Mr T Experience, NOFX, etc.

Clerks (1994) (imdb)
When the main characters leave the burial the song Leaders and Followers can be heard.

The Chase (1994) (imdb)
Features the song Two Babies in the Dark. The full intro is played, but when Greg starts singing, the volume is decreased so the characters talk and stuff. The song can still be heard in the background, though. At the end of the scene the volume goes up again.
Brett said the soundtrack to The Chase was not released by Epitaph because 1) He hated the final cut of the movie compared to the original director's version (before the studio got their hands on it). 2) The studio were total pricks and hard to work with and 3) Epitaph had no control over the album cover.

Weird Science (series) (imdb)
There's a Bad Religion poster on the locker of a girl that Gary is talking to. Episode unknown.

Zoey 101 (series) (imdb)
There's a The Empire Strikes First poster on one of the kids' wall. Episode unknown.