New America | The Answer | The Bad Religion Page - Since 1995
Quote of the day: "Humanity is a nowhere scene. When everybody has an AR-15." - The Kids are Alt-Right
New America
Home > The Answer > New America
Join discussions about this article in our Group on Facebook

Right at the beginning of this song you can hear Greg screaming "Jimmy" with an English accent. This is a reference to Jimmy Pursey[1], the founder and frontman of English punkband Sham 69.

There's a video clip for New America in which two kids can be seen playing with action figures representing the band members. At one point the Graffin figure is seen throwing up; in the early draft of the video, however, that figure was Baker.[2] 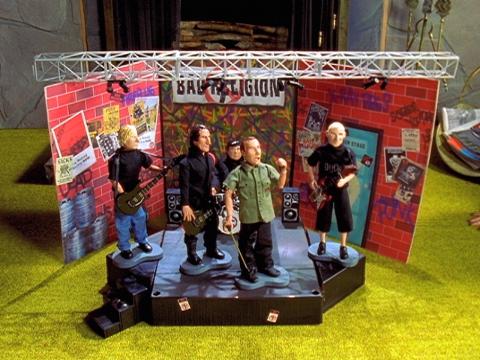 The single was released to Alt Radio stations on March 8, 2000. It did not chart on any major chart worldwide.