Public Service | The Answer | The Bad Religion Page - Since 1995
Quote of the day: "It's never really clear when the end is near. 'Til you take a hard look in the rearview mirror." - Downfall
Public Service
Home > The Answer > Public Service
Join discussions about this article in our Group on Facebook

A 12" vinyl compilation put out by Smoke 7 Records on December 10, 1981 with Circle One, RF7, Redd Kross and Disability. It has Bad Religion, Slaves and Drastic Actions (different versions from the first EP, as they contributed the songs during the making of the EP). In 2003 the compilation album was rereleased on CD by Puke 'n Vomit. 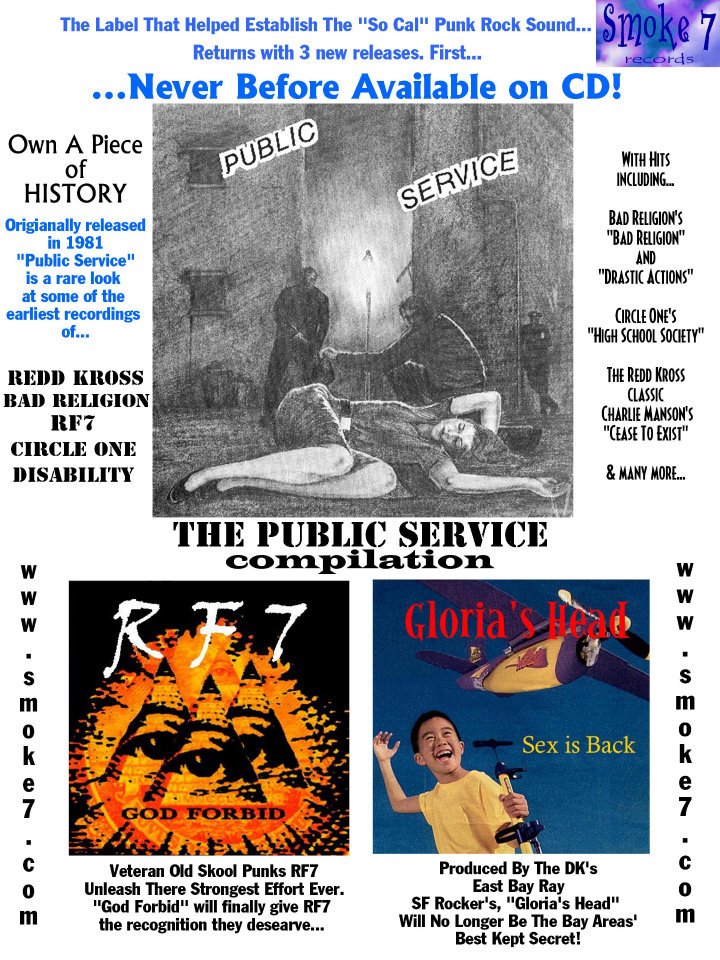 In December 2011 the songs that Bad Religion provided for the 1981 Public Service compilation were rereleased on 7" black vinyl by Smoke 7/Puke 'n Vomit. The release was accompanied by t-shirts, hoodies, patches, buttons and several stickers. Some very noticeable mistakes were made: the crossbuster logo is mirrored, the Bad Religion font on the front of the sleeve is wrong, the lyrics for Drastic Actions are actually those of Bad Religion and the lyrics for Slaves are completely wrong (most likely copied from a lyrics website).
It was said that the release was limited to 500. Immediately after The Bad Religion Page reported about this rerelease (and because of all the mistakes that were made labelled it as a "bootleg"), some controversy started about the legitimacy of the release. Brett's opinion was that Smoke 7 had no right to sell any merch and that the contract language referring to phonograph records denotes the original Smoke 7 compilation album only (although the crappy merch with the backwards crossbuster pissed him off much more than the sale of a 7" bootleg).

A clear red vinyl version was released not much later. The sleeve and vinyl labels for this one are identical to the black vinyl version, but the lyrics sheet was corrected, including the crossbuster logo.

In December 2012 yet another version of the 7" was released; this time on clear yellow vinyl. The sleeve and vinyl labels of this release now also had the right crossbuster logo and the right font.... finally making it 100% correct.
An additional insert was included with this release, though: a copy of the original contract with Smoke 7 Records, apparently proving this 7" rerelease is legit. Hence the red text "Hey skeptic! Here's your proof." In October 2021 another colored version was released. This time on black and white vinyl, limited to 1000 pieces.

It's not clear if Ed Colver received any money from Smoke 7/Puke 'N Vomit for having used one of his photos.

The songs from the Public Service compilation can be found on 80-85 and the 2004 digital remaster of How Could Hell Be Any Worse? They are the final three tracks on either release (tracks 26-28).