Tested (album) | The Answer | The Bad Religion Page - Since 1995
Quote of the day: "We've got shiny new tools for ancient impulses that we can't even understand." - The Kids are Alt-Right
Tested (album)
Home > The Answer > Tested (album)
Join discussions about this article in our Group on Facebook

Tested is a live album. According to Greg it's Bad Religion's thirteenth release, hence the 13s on the artwork. "The members of BR have high regard for things that endure against the odds. We thought Tested was a good title for this album because in many respects we have stood the test of time. We are sure this album will as well. It is a very personal project, and one that nicely illustrates our live heritage, and details the consistency in our music over the last 16 years".

Jay: "Tested was a pet project of ours. I also consider that 'official'... but I guess sort of like an 'unofficial bootleg', that we made ourselves for fun..."

The idea of Tested started before the Gray Race Tour ever started. Right on the week of the release they played some small clubs in Europe to get physically close to the fans, and Greg started thinking of Suffer as an album which captured the emotional spontaneity they were looking for, and thought he'd like to recapture that in a way. He therefore want record their live shows very simply, very basically and make it sound like Suffer. He thought it would show that a lot of the newer, better-produced songs, still can translate into Suffer-like, in-your-face format.

It was a 16-track digital recording with no overdubs. All tracks are the original takes from the live show.

There are three new tracks on Tested: Dream Of Unity, It's Reciprocal - which were both written during the Gray Race Tour - and Tested. (Brian wrote half of It's Reciprocal),

Atlantic Records turned down releasing the album and, since it was going to be made only in Europe, BR decided to import loads to the US so people could buy it at a non-import price (they were recommending a price of $15.99 in US stores). Dragnet worked out a way to ship the record from Europe into the USA at a relatively low cost. It required BR and Dragnet to both make less money; BR in the form of a reduced royalty rate, and Dragnet in the form of a lower margin of profit. Thus, in America it was an import record on the Dragnet label from Germany, and in the rest of the world (where it was released in the middle of February, a month earlier) on the Dragnet label, or regional SONY affiliate label. Still, there was quite a lot of confusion when it came out because most fans couldn't get it while others already had it; and some paid lots and some very little. Greg's advice was to "be patient and absolutely [do] not pay more than 20 dollars for it". CD NOW was selling it for $18.95 + S&H, the Virgin Megastore in NY was charging $30 and BR themselves set up an ordering service where one could get it for $13 net of postage. They would even send you an autographed copy if you asked them to when ordering it. The distributors were being quite slow and also a CD shipment was sort of stuck in customs for a while and they eventually got them on the 25.3.1997 instead of the 18th which was the official release date. Michelle (BR's manager) said Dragnet would import it because Atlantic were being jerks.
Brian commented: "We were kind of confused! I think perhaps our American label didn't think it was going to make them enough money. And they didn't understand that we didn't put this record out to make money, we don't expect everybody to buy it. They didn't seem to understand that we wanted to put something out for the people who had followed the band for a long time. We didn't want to have some marketing plan, and we did not want to go on tour behind it, and give MTV videos, and, you know... I guess our German label understands what we're trying to do, and the American label doesn't."

Greg approached Brett about the album and Brett replied that it was too early in BR's career for a live album. He argued that live albums usually mark the end or waning of a group's career; they are a documentation of a group's early vital years; he felt that if BR were to continue as a vital group continuing to put out new material and if indeed their best material were in front of them, than a live album was premature. Another reason he gave is that "All Ages" had just been released. He said that "two retrospectives in a row seems like ripping off the fans to me. A great new studio album is in my opinion what is called for before a new comp is released."
Brett was also very hurt and angry because only four of his songs were included in the album. He called this "a fucking low blow" and said Greg had done it to get more money from the album (songwriters get extra money). He said that he hadn't spoken to Greg about it but said: "I dedicated 16 years of my life to that band and to leave my songs off the live album is a supreme insult in my estimation". On 2.28.1997 Greg wrote: "I maintained that our live show doesn't depend upon who wrote what songs, and therefore the live album doesn't either. I thought we were friends again too until I found out how angry he was because he didn't have any say in the song choice (...) I have always wished Brett well in running his label and never stood in the way of its progress (in fact, some would argue that my singing has only helped Epitaph records; I tend to concur). But the day he decided to quit Bad Religion was the day that he stopped having a say in our activities. He was adamant that we should consult him on a project like this because he consulted us when it was time to release 'All Ages'. However, it is not an equal situation. A label must always consult its artists when it wants to release an album unless it wants the image of a marketing machine that has no regard for the people it promotes. A band is a creative entity that is far more whimsical and less calculating than a record label. When we made 'Tested' we didn't even consult the labels that we are signed to now, we just wanted to record something and produce it ourselves and not have any intervention from anyone, and that includes a past member. Although we are glad that he consulted us when it was time to put out All Ages, he certainly didn't have to, but it was in his labels best interest to choose the songs that best represented Bad Religion, and who better to consult about that than the people who play those songs every night on stage? Finally, remember that 'Tested' is a live album not a retrospective of the best studio work we have done. As such it is a representation of last year's tour which included a lot of material from the Mr. Brett era but also an entire album and six B-sides of songs that he wasn't a part of. We simply chose the songs that were the best takes and the best recordings and the 27 songs you see on the album were the result.
The songwriting credits were not the determinant". Brian said the reason why they released it is that they did the whole record themselves. "We recorded it ourselves, it was our concept, and the live B-sides that were on the singles were always just sort of things that were thrown on, you know, that some radio station had recorded, or it had been, you know, some situation on some concert where some fan had recorded something. Tested really represents what we are, and what we are doing now (...) It sort of marks something that we're going to work forward from (...) and it was very very fun to make, and it's important to us. So we put it out."

There are 13 cent "Tested stamps", which were meant to be put on BR's newsletters. However, these are not real stamps and thus could not be used to send letters in the mail; they were just a promotional item for the band. 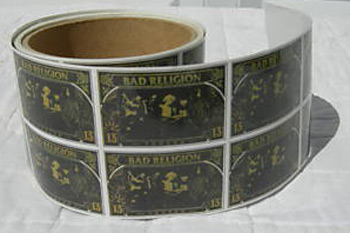 This was an advertisement for the album in a German magazine:

In the booklet that comes with the Streets Of America single, there is a voting ballot where fans could vote for 15 songs and send it in to be on the Tested album:

"If you are a real Bad Religion fan... well are you??
We've got some great news for you!!!
Bad Religion will release their first ever official live album in January 97. This album will include 3 brand new studio tracks and some of the best live cuts recorded in Europe and the U.S. 1996. You can join the competition by picking 15 of the all-time fave Bad Religion songs listed below. You can win 3 days hanging out with the band outside of Europe or a guitar/drum/bass lesson with your favorite band member."

A German review by Wolf-Ruediger Muehlmann of Rock Hard Magazine said: "With the power of an old men's group which gathered to admire the latest collection of tupperware the band drags on from song to song. Greg Graffin is often on the verge of breaking down, weak as he yodels the songs. And, no joke, the sound quality really made me think my stereo was defect, when I first listened to it. I do even own BAD-RELIGION-bootlegs with a better sound! Not to mention the bad joke that this is a collection of single song recordings with the corresponding fade outs".

The shows at which each song was recorded is indictated in the liner notes. Here, they are simply listed for reference and to connect them with our Bad Religion show archive.