The day Bad Religion completed recording 2010's The Dissent Of Man they started talking about the next record. According to Jay they weren't really happy with the overall result of that album; they felt there needed to be something different but didn't know how to get there and didn't seem to have a plan on what they felt they wanted to do. It was a discussion between Brett and Tom Waits where Tom said: "Here's what I did on my last record: I set a time limit for how long my songs could be. I no longer had this freedom to have seven minute jam.". That's when Brett, Greg and Jay decided to stay within the two-minute limit per song. Although there are a couple of songs on True North that are longer than two minutes, it's not by much.

They didn't feel like the 2-minute limit was a constraint but rather a freedom where they didn't have to worry about filling a time slot with a bridge or a guitar solo. Both Brett and Greg loved it.

Greg Graffin had his teaching schedule and Brooks had tours with Tenacious D, so they didn’t have a lot of time to make True North. Greg was actually still writing his songs when they got to the studio; they were really incomplete.[1]

Brett said in the True North press release: "We went back to our original mission statement of short concise bursts of melody and thought. The intent was to record stripped down songs without sacrificing any conceptual density. I think we both really responded to the challenge of writing short and fast songs on this record. The constraints set us free. Like moves in a game of chess, there are really as many variations as there are stars in the galaxy."[2]

Graffin added: "I think working within certain restrictions took away the mental aspect and let us devote more attention to conveying feeling. We all go through pain and the best elements of punk give us hope in those dark times. The song is written from the perspective of a kid who is running away. He says 'I'm out of here, I'm off to find true north.' It's about recognizing that you don't fit in and trying to find a truth and purpose. Those are all classic punk themes."[3]

Jay: "This album came together super organic and when we were done in the studio we were like: this might the greatest thing we've ever done!"[4]

True North is considered just a little off magnetic North on the compass. Finding True North is a metaphor for finding your place in the world. 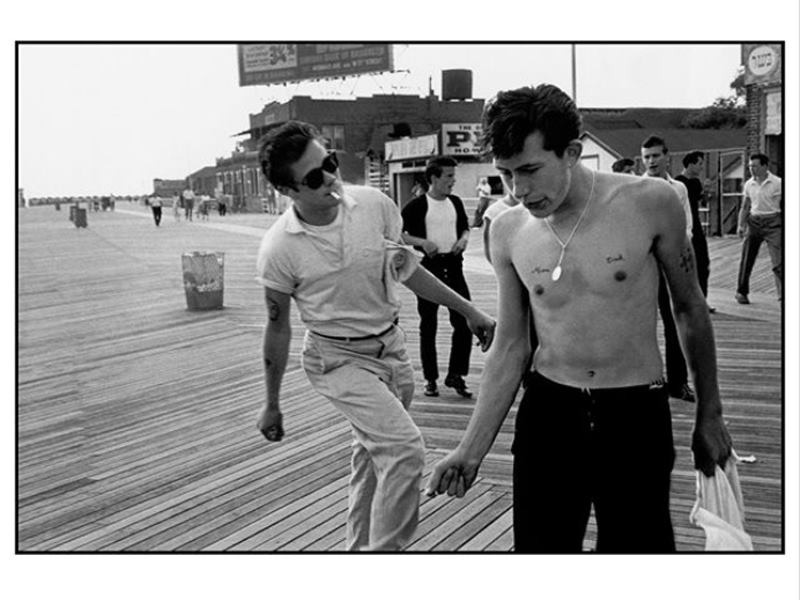 The picture on the album cover comes from a 1959 project from NY based photographer Bruce Davidson. The project was titled Booklyn Gang, a collection of images of tough people and tough lives that captured a vision of youth in post-war New York. The man's name is Lefty.[5]

In response to what influenced the band the most on True North, Jay said: "Suffer.’ [laughs] I don’t know… I guess, as much as that was a joke, it really was a big influence. I kept looking back to it, to its structure, and the ideology of how we recorded back then. We wouldn’t spend a lot of time on it back then, we were really just mucking around."[6]

The album was released on January 22, 2013 on LP, CD, and digital through Epitaph.

Jay: "When True North came out, Brett and I had a conversation that if this was the last thing we did, we would be okay with that." [7]

The album peaked at number 19 on the Billboard 200 in the United States. This is the bands only Top 20 album, the highest ever in their career.

Jay said that after the release, both he and Brett would have been okay with True North being their last record, had it come to that.[8]