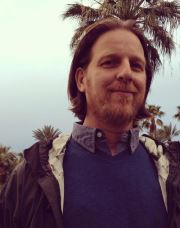 John Albert, a child of academic parents, was born in 1964 and grew up in Claremont, Southern California. Claremont, a college town thirty miles East of Los Angeles, was a kind of bohemian hippie desert town and the birthplace of singer-songwriter Ben Harper, who happened to be John's next door neighbor. In his early years John used to babysit Harper and his brothers on a regular basis, while smoking pot and make them listen to DEVO. Besides smoking pot in a daily basis, he also enjoyed skateboarding and listening to records. Before discovering punk rock, John was into old glitter rock like Iggy Pop and David Bowie.
John first tried to play the guitar, but he never was any good. At the age of fifteen John and his best friend Roger Painter (aka Rozz Williams) wanted to start a band since they both loved old glitter rock and new punk rock like The Germs. In 1979, he and Roger founded the band Christian Death in John's parent's garage. In the beginning it wasn't death rock but just punk. According to John the best example of how it sounded was a song called "Romeo's Distress" which was on the band's first record. By that time John could play some basic chords and bought a cheap Flying-V guitar from some Jimmy Page wannabe. He started playing drums for fun because so many people he knew already played guitar. He used to live on a crazy house with a bunch of people and in the middle of the living room was a drum set. On that drum kit he played old metal songs like UFO's "Lights Out in London" together with Frank Agnew from the Adolescents. John never took drumming very seriously, but thought it was a good exercise and it was always a lot of fun for him.
Even though he never considered himself a musician, John liked to and tried to learn from Rat Scabies (drummer from The Damned), the Italian band Raw Power, and the English band Wire. After Christian Death John became addicted to heroin. Through his teen years John had a girlfriend named Maggie, who later married Brett Gurewitz. He was also friends with the guys in Bad Religion and, together with Frank Agnew and Steve Soto from the Adolescents, they all hang out at Jay Bentley's house and get drunk. During that time John wasn't doing anything and was trying not to use drugs. In 1984 Greg Graffin out of the blue called him and asked if he had a drum kit. John confirmed and ended up being drummer in Bad Religion replacing Pete Finestone who had left to England again. After getting the records John learned all the songs in five weeks, practiced a few times and went to San Francisco to play his first show with the band at the On Broadway. John enjoyed playing shows but was also worried about his growing heroin problem and tried to keep it in check when he was around the guys. When he started to play in Bad Religion he could barely play, but by the time he left he was a decent drummer.
During his time in Bad Religion they only played songs from How Could Hell Be Any Worse. Although he didn't play on Back To The Known, John hung out in the studio when they were recording the EP. At that time Bad Religion would play some shows and then take long breaks because Greg Graffin was in college. Meanwhile John was really addicted to heroin and kept getting arrested. Within a year he sold all his possesions, pawned his drum kit and was finally given a choice by a judge after being arrested again: go into a really hard core long term rehab at Impact or go to prison. John chose rehab and never told the band he was going. He eventually disappeared and his place was taken by Circle Jerk Lucky Lehrer.
After Bad Religion John never played in a band again since being a serious musician was never his intention. However, he played in the first version of Punk Rock Karaoke a few times and then jammed with Adam Horovitz of the Beastie Boys in a band that was later called DFL. After staying off drugs for a few years, John went to film school and started writing stuff. In 2000 a friend of John convinced him to send in a piece for the 'Best Of' edition of L.A. Weekly. He wrote down a paragraph about his baseball team and emailed it. It was forwarded tot the features department and they later called him up to ask if he could write it up into a cover story. This was the beginning of his career as a journalist. (1) From 2000 until 2010 John has written several articles for the L.A. Weekly, including an article on Bad Religion. He also contributed to Hustler and BlackBook and won the Best of the West Journalism Best Sports Writing Award in 2000, for the L.A. Weekly article from which Wrecking Crew was derived (2)
During that time John also visited the treatment center Impact again where he met Brett Gurewitz who was in the process of being treated for his drugs addiction. They stayed in touch and in 2002 John hung out in the studio when the band was recording the vocal tracks for The Process of Belief. They called him in to help them yell out a single-word chorus for "Evangeline". After 15 years John finally made it onto a Bad Religion record. (3) 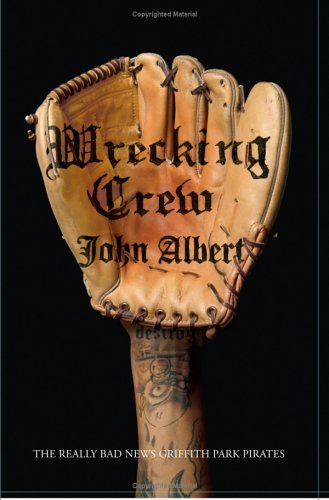 [Excerpt from 'Star Extinguished] "During the early '80s, in the midst of my struggle with drugs and dark, aching depression, I joined a local punk-rock band called Bad Religion, as their newest drummer. Now, to be sure, this was not during the height of the band's popularity. It was a few years after the group's  initial underground success and still some time before a creative resurgence would result in hit singles, gold records, and a dedicated worldwide following. [...] But with Greg Graffin, the original singer, still up front and an arsenal of beloved songs, the band maintained enough of a following to draw sizable, enthusiastic crowds to the live shows. On a warm, humid night in L.A., we played to around three thousand kids in an aging downtown boxing arena called the Grand Olympic Auditorium, and by all accounts, it was a flawless and well-received performance. I even have a videotape to prove it."
The book got some great reviews and it was optioned by Paramount in 2007. However the Paramount option expired and was later optioned by Anonymous Films (used to be Propaganda Films) who did also Being John Malkovich and Eternal Sunshine of the Spotless Mind.
John still writes articles mainly for magazines and news papers such as the Los Angeles Times, Variety and Fader. He is planning on doing a second book and currently runs the ANTI- label blog with Gina Gurewitz. When asked about his part in Bad Religion John's humble answer was: "In the grand story of Bad Religion, I’m a tiny little fragment. I’m not even Pete Best (the Beatles first drummer) I’m actually more like Pete Best’s cousin who filled in for a few gigs because Pete had a lingering flu. But the important thing is that I’m still friends with those guys. And in that way, it’s kind of my history too."
Many thanks to John for helping us out with this story.
(1) http://www.tlchicken.com/article.php?ARTid=3284
(2) http://authors.simonandschuster.com/John-Albert/19474386
(3) http://www.thebrpage.net/media/item.asp?itemID=494