On December 23, 1966, Robert “Bobby” Allen Schayer was born in the southern San Fernando Valley in California. He grew up in Los Angeles together with his brother and sister. Bobby’s mother, Angelina Estrada, was an actress and danced in several Elvis movies, including ‘Blue Hawaii.’ She also played in the romantic comedy ‘Ghost’ with Whoopie Goldberg. His grandmother also featured in several movies, such as ‘Giant’, a drama film with Elizabeth Taylor and James Dean. Bobby’s father worked as a police officer in Hollywood, where he was present during the arrest of the American stand-up comedian Lenny Bruce.

During Bobby’s childhood the Los Angeles area had about thirteen TV stations; it wasn’t odd that Bobby grew up watching all the music shows such as Midnight Special, Lawrence Welk and Don Kirshner’s Rock Concert. He watched every show and didn’t even bother whether it were good or bad shows. While checking out all his favorite music Bobby noticed that some drummers, like Rolling Stones’ drummer Charlie Watts, only had one tom. This was when his interest in drumming started to grow.

However, Bobby’s first instrument wasn’t the drums, but the guitar and bass guitar. Together with his older brother Steven he started to play ‘being in a band.’ The Schayer brothers exactly knew what kind of band they wanted to play in: a real rock ‘n’ roll band. Even though they played guitar, Bobby soon got some sticks and an improvised cardboard ‘drum kit’ to make his own ‘noise.’ In 1977, at the age of eleven, Bobby’s life completely changed when he saw The Ramones on television. He immediately went to the record store to buy the self-titled debut album. He soon started to learn how to drum the songs. Within 2 minutes he already knew how to play ‘Loudmouth.’ Bobby discovered that it was so easy that he could learn twenty songs in ten minutes. In punk rock Bobby finally found his music.

By the time they had learned the entire album, Bobby exactly knew what he wanted to have for his thirteenth birthday in 1979. His first drum kit was a black CB-700 Percussion 5 piece with 2 toms bought at a shop called Finn’s Music Emporium in Sherman Oaks. Bobby took off one of the toms as he wanted to look like his idols Tommy Ramone from The Ramones, Paul Cook from the Sex Pistols and Clem Burke from Blondie. Steven started to take lessons after he had gotten a guitar and an amplifier; so it was Bobby’s time to get some drum lessons.

Bobby started looking for someone who could teach him some drum techniques. At one night when he was at the Whiskey A Go Go in Los Angeles, he saw a local punk band playing: the Circle Jerks. His attention was caught by their drummer Lucky Lehrer. Bobby liked Lucky’s drum style and told his friend Alison Braun, that he wanted to drum just like him. Alison pointed out that Lucky was a drum teacher and that he should call Lucky. She also mentioned that he could find Lucky’s phone number at the sleeve of the bands’ record ‘Group Sex.’ Bobby bought the record and called the number. To his surprise it was indeed Lucky who picked up the phone. 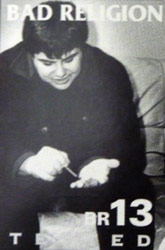 Bobby and Lucky soon met each other outside the Chinese Theatre in Hollywood, where Lucky picked him up before going to the Circle Jerks rehearsal space, which was the house of vocalist Keith Morris’ mother, in Englewood. However, Bobby didn’t like the idea of having to take the bus every week and besides that, Keith’s mother didn’t like to see Lucky’s drum students coming over to her house all the time. So the only solution was that Bobby had to go to Lucky’s place. Eventually it worked out perfectly as it was only fifteen minutes away from where Bobby lived. During that time, Lucky also had some other drum students. One of them was Peter Finestone.

After a ten dollar introduction lesson, Bobby decided to get a drum lesson every week for only fifteen dollar a lesson. Lucky was also a passionate jazz drummer, so he taught Bobby how to read music and the importance of having goals. Bobby’s main goal was of course to be in a band. By 1988 Bobby had been playing in several bands such as Rubyfish and The Clay Idols, a pop band fronted by his brother Steven. In 1988, Bobby joined a band called The Question, but only stayed for about a year.

After leaving The Question, Bobby soon joined in 1990 another band called The Two Free Stooges, which included Dick Rude and Manny Chevrolet on vocals, Pete Weiss on bass guitar and guitarist Zander Schloss, who also played in the Circle Jerks. The band never wrote its own material, but only played covers of Cream, The Clash and Led Zeppelin mixed with some stand-up comedy sketches. Even though the band never recorded any albums, they did three tours.  With The Two Free Stooges Bobby gained his very first touring experience as support band for The Smithereens, The Red Hot Chili Peppers and The Dead Milkmen. After quitting and going back several times, Bobby finally left the band after a year. During the early nineties, Bobby also worked as a drum technician for Los Angeles punk band The Dickies. 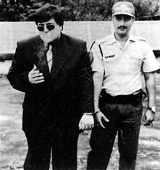 In 1991 Bobby got a phone call from Bad Religion’s guitarist Greg Hetson, who asked him if he was interested in becoming the band’s new drummer. Bobby immediately called back and went to the auditions. However, Bobby wasn’t the only one at the audition; Nicky Beat from the Germs and Colin Sears from Dag Nasty were also invited. However, Bobby had learned to play twenty-five Bad Religion songs in two days of time. During the audition no one believed that he could play all the songs, but after Bobby had shown his skills the band accepted him as their new drummer. But before he officially became the newest band member, he first had to get Brett Gurewitz’ approval. After having seen Bobby playing three songs, Brett only wanted to know one more thing about Bobby; whether he could play chess or not. Bobby’s confirmation eventually was his ticket to the band.

On April 1, 1991, Bobby officially joined Bad Religion, only one month before the recordings of the band’s sixth album. After the recording of Generator, the band spent several months touring through Europe and the United States. After the tour, Bobby went back to his job at A&M where he packed boxes. In 1994, the band put out their eighth studio album called Stranger Than Fiction. After having sold over half a million of records in the United States, this album eventually became on March 4, 1998, the band’s first RIAA certified golden record. Each member received five golden records. Bobby gave four of them to people who had been of great importance: his parents, Lucky Lehrer, Jack Rabid and Wayne Kramer.

By 2000, after the release of their eleventh album called The New America, Bad Religion was asked to do the opening show for the Californian band Blink-182 during their ‘Mark, Tom and Travis Show Tour’. Bobby saw this tour as one of the highlights in his drumming career as it was the first time he could play in front of 14,000 people. One month after having toured with Blink-182, the band started its own headlining tour to promote their latest release. During that tour Bobby started to have problems with his shoulder as the rotator cuff was damaged. Because of the injury Bobby couldn’t lift his arm properly and eventually had to end his drumming career in 2001.