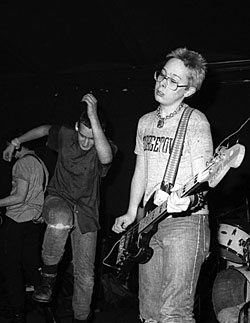 Brian Baker was born on February 25, 1965. He grew up with a lot of media around him as both his parents worked in the media world (the television news) until they retired.
When he was 8 years old, Brian got an acoustic guitar for Christmas. His childhood friend Michael Hampton, who later played in bands as State Of Alert and Embrace, also got a guitar and even though they hardly knew how to play they soon decided to start a garage band comparable with The Everly Brothers.
However, Brian kept on playing the guitar trying to look and sound like his biggest influence Captain Sensible from the British punk band The Damned. At the age of twelve Brian lived with his family in Michigan. There he once got the opportunity to jam on stage together with guitar legend Carlos Santana.
But before his successful career took off Brian first played in a band called Silent Thunder.

In 1980, Brian co-founded with Ian MacKaye, Jeff Nelson, Lyle Preslar and Nate Fore the hardcore punk band Minor Threat in Washington D.C.
His first show was as bass player with Minor Threat when they opened for Bad Brains in somebody’s living room. Brian was petrified, but it also gave him a rush of adrenaline. In 1982, Steve Hansgen joined the band to play the bass, so Brian switched to playing the guitar. As soon as Hansgen left the band, Brian once again picked up the bass. However, after the departure of Hansgen, the band decided to split up because of disagreements over the musical direction. They played their last show on September 23, 1983.

After the break-up of Minor Threat Brian and Lyle Preslar first played in a band named 400. The band was influenced by the Irish band U2, which gave them a pop directed sound.
After 400 Brian, Preslar and former Minor Threat band member Jeff Nelson joined Glenn Danzig’s new horror punk band Samhain, which was founded in 1983 after the break-up of the Misfits. Brian was meant to become a permanent member of the band, even though he only played during some early jams and rehearsals. Yet, he decided to leave the band because he thought his playing did not integrate very well with the other band members. Once again, he joined together with Preslar another punk band called The Meatmen in 1984.

In 1985 Brian left The Meatmen to set up his new melodic hardcore band Dag Nasty. This band was seen as the first new breed of professional hardcore bands,

which influenced many emocore and post-hardcore bands. Brian first met Bad Religion, except for Greg Hetson who he already knew since 1981, in the early nineties when Dag Nasty released their Four On The Floor album on Epitaph Records.
Besides Dag Nasty he also played in bands as Doggy Style, Government Issue, which was one of the longest-running bands in the D.C. hardcore scene, and Junkyard, a “Motörhead meets Lynyrd Skynyrd” hard rock band. With Junkyard it was his first time to play on a record with a band that was signed on a major label: Geffen Records. After putting out two albums on the label, Brian departed and joined Careless.

Careless was quite successful in the L.A. club scene as they were almost signed to a major label, however, the band broke-up when all members got other ‘once-in-a-lifetime’ offers.
By 1994, Brian worked as a guitarist-for-hire and also spent some time working in a pool hall. He was the first member to leave Careless when he was asked by R.E.M. to fill in for Peter Holsapple during their Monster Tour which was planned to last for 19 months.  Brian first accepted the offer, but when he was offered to replace guitarist Brett Gurewitz in Bad Religion, he changed his mind. Eventually, his best friend and ex-member of Careless, Nathan December accepted the offer.

Brian did not play on any studio release until The Gray Race in 1996. Besides being a member of Bad Religion, Brian also occasionally appeared on stage with Dag Nasty and recorded together with Ric Ocasek (producer of The Gray Race) and Melissa Auf der Mauer (former Hole bass player) the album Troublizing, which was produced by The Smashing Pumpkins vocalist Billy Corgan.

In 2002, Brian agreed that he can be held responsible for introducing the term ‘emo.’ It accidentally happened when he was at a Rites Of Spring show where the entire audience was crying and throwing rose-leafs on stage. Brian’s reaction on this emotional impression was “this is as punk as a champagne-brunch, fuck this emo core!” Even though it was meant to be negative, many bands started to use it to define their music. He kind of regrets the term; in his opinion he would rather define ‘emo’ as “music with lyrics about personal experiences brought in a sensitive way.”

Brian still lives in Washington D.C. approximately ten blocks away from the place where he played his very first show with Minor Threat. When he was asked in 2002 where he would like to see himself in ten years he answered that it would be fun to do a reunion tour with Dag Nasty.
Currently, he is working with the rest of the band members on new material for the upcoming fifteenth Bad Religion studio album, which is planned to be released in 2010. 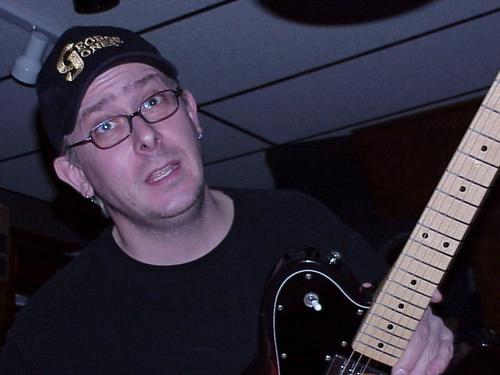