Motorhead | The Answer | The Bad Religion Page - Since 1995
Quote of the day: "Faces of grief / Rage is a key / Pain is a thief" - Faces of Grief
Motorhead
Home > The Answer > Motorhead
Join discussions about this article in our Group on Facebook

Jay and Greg first met Lemmy in 1982 at the Hollywood Palladium where Motörhead, Krokus ,and Fist played (Monsters of Metal tour). Jay gave Lemmy a copy of the How Could Hell Be Any Worse? LP as he was getting on his bus. 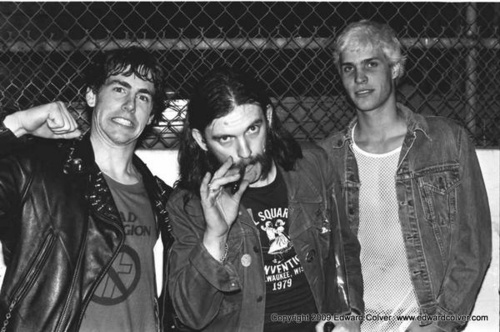 They have a song called "Bad Religion" (Kilmister-Burston-Campbell) on their album March Or Die (WTG records, 1992, catalogue number 48997). It is not a reference to the band.

Jay: "He's just a badass. Everyone from Gene Simmons to Sid Vicious were just wet puppets compared to Lemmy. Not the best, but the loudest, not the most technical, but will smash your face with sheer brute force. The epitome of a rock and roll bass player. Untouchable and unfabricated, unapologetic, and quite frankly, one of my ideal role models."    [1]