Minor League news #5 | The Bad Religion Page - Since 1995
Quote of the day: "Kerosene keeps me warm, I'm alone to watch it burn" - Kerosene
Minor League news #5
Home > News from the front
Join discussions about this news in our Group on Facebook

The sequel to the fist Bad Religion podcast has arrived. Read all about the first episode here.
This time Carlos (a.k.a. rai32) managed to fill his 30+min podcast with "Songs that start with a guitar intro riff".

This second podcast has been added to the playlist, so simply click the logo below and start streaming it. Or you download the MP3 here.

In a recent bulletin on Myspace Greg Hetson announced that he'd be DJing March 26 at a restaurant in Hollywood called Kung Pao Kitty.

"DJ Greggers(me) spinning my eclectic mix of tuneage for your auditory pleasure."

Too bad we weren't able to find any additional details on this. For example, is this something Greg does more often or did he get his DJ-cherry popped that night?
If you have more info, drop us a line at punk@thebrpage.net.

A couple of weeks ago a new feature was silently introduced on thebrpage. The Tucson show of March 16 was the first show to which pictures were added by fans. Since then a couple of improvements have been made to the way pictures can be added to shows and we're proud to announce that per today this functionality is officially live.

Things you need to know:
- It doesn't matter what resolution your pictures have. Pictures that are too large will automatically be resized
- Pictures may only by 2MB in size. If they're bigger than 2MB, you'll have to resize them yourself prior to uploading them
- You can add a maximum of 25 pictures per show
- You can choose whether or not to add a "The Bad Religion Page" watermark. By default this option is enabled, but in case a picture already has a watermark you can disable it
- Although it's optional, you can add titles to your pictures

For the last couple of days our Tours & Shows editor delirium- has been very busy adding pictures of flyers, posters and ticket stubs.

So feel free to add any pictures you have of shows you've been to. Whether it's a shot of the entire band, a single band member, the outside of the venue, a poster, a flyer or a ticket stub, it doesn't matter. But before you start, always ask yourself the question: Quality or Quantity?

The next logical step is a full-blown Image Gallery in which all pictures that are scattered around the site can very easily be found and displayed. Here's a preview where only the pictures are shown that have a label called "flyer".

It's already been over a week since Extreme Thing festival took place in Las Vegas and although the songs that were played are known, the order of the setlist has not yet been confirmed.
Several videos of Bad religion can be found on Youtube, but the only slightly decent video that has surfaced is one of Fuck Armageddon... This Is Hell.

This next video hasn't got Bad Religion in it, but is noteworthy nonetheless. The question that arises is: Is this what pits have come to??

It's incredible to see how little information is coming from Japan. No pictures, no videos, nothing. Sad but true.
The only stuff that got out is a setlist from Osaka and couple a pics from Brett that he posted on www.epitaphblog.com. 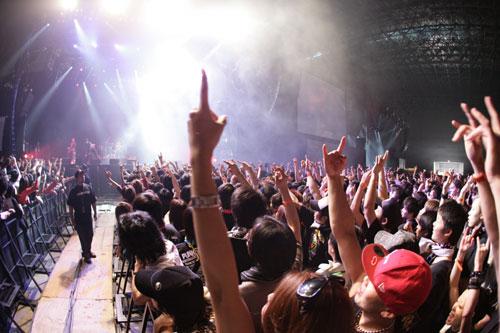 And last but not least, a big thanks goes out to Wrong Planet. During the last week and a half he has literally found hundreds and hundreds of typos, incorrect lyrics, etc on this site.
If we'd have an award for the most observant BR fan, Wrong Planet would definitely be our first choice! Thanks again for the many hours that you put in!

Reported by: Not specified
Tags: Greg Hetson, podcast, japan, Minor League
Add a comment
Please keep your comments on topic. Off-topic discussions can be continued in our forum.
You don't have to be logged in to add comments. However, to prevent impersonation it is recommended.
Click here to log in or register.
User comments (9)
Search news
Related news items